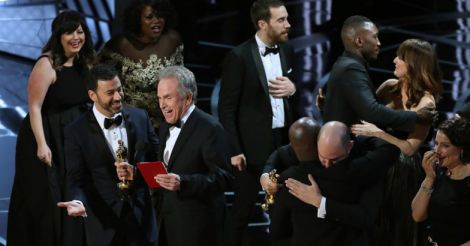 After what must be the biggest Academy Awards blunder ever, the accounting firm in charge of the ballot counting process has issued a statement clarifying its role in the error.

At the 89th Academy Awards, presenters Warren Beatty and Faye Dunaway announced La La Land as the winner of Best Picture when, in reality, Moonlight had earned the top prize.

Halfway through the La La Land acceptance speech, the error was clarified and the correct card was shown on camera.

The firm released a statement apologizing to Moonlight, La La Land, Warren Beatty, Faye Dunaway, and Oscar viewers for the error that was made during the award announcement for Best Picture. "The presenters had mistakenly been given the wrong category envelope and when discovered, was immediately corrected. We are currently investigating how this could have happened, and deeply regret that this occurred. We appreciate the grace with which the nominees, the Academy, ABC, and Jimmy Kimmel handled the situation," the statement said.