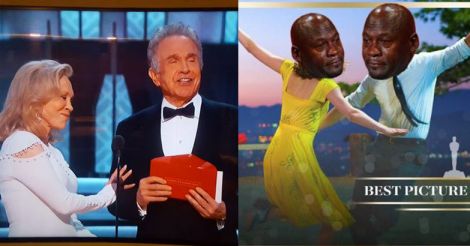 In a rare and unexpected gaffe, La La Land, which dominated the 89th Academy Awards, was announced the winner of the Best Picture category, when in fact it was Moonlight.

Presenters Warren Beatty and Faye Dunaway who were called to announce the winner, pondered a while before reading the cue card, which ended up being wrong.

The La La Land makers were mostly through their speech before the error was realized, and a representative said: "There's a mistake... 'Moonlight', you guys won Best Picture... This is not a joke, I'm afraid they read the wrong thing. 'Moonlight' - Best Picture."

After the unprecedented mix-up on stage, Oscars host Jimmy Kimmel said: "I blame myself for this. I knew I'd screw this up... I promise I'll never come back."

The incident was reminiscent of comedian Steve Harvey's infamous Miss Universe goof-up in 2016, when he mistakenly gave the crown to the wrong winner.

Taking a dig at the Oscars, a post from the official account of Miss Universe, read: "Have your people call our people - we know what to do. #Oscars #MissUniverse."

When you win the oscar right after you lost the oscar #lalaland #Moonlight #Oscars #BestPicture pic.twitter.com/MCnucgD5BD

The Oscars be like... #lalaland #moonlight #oscars #academyawards #steveharvey pic.twitter.com/NbVZSP7eOZ

While #WarrenBeatty apologized on stage, where was #FayeDunaway who was the one who actually announced #LaLaLand as the winner? pic.twitter.com/3O6VmzzGS8

La La Land and Moonlight walk into a bar. The bartenders ask, "who won?"