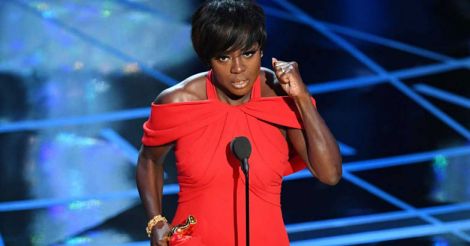 Los Angeles: Third time was certainly a charm for actress Viola Davis, who won her first Oscar after being nominated thrice.

Davis won the Best Actress in a Supporting Role Academy Award for portraying Rose Maxson, a devoted wife and mother who tries to champion her son's ambitions against her husband's sometimes savage derision in the film Fences, directed by Denzel Washington.

Clutching the golden trophy to her chest, she got all teary eyed as she thanked the film's team and her family for the honour that was given to her on Sunday here at a glittering event, attended by the Who's Who of Hollywood.

While accepting the award, she said: "Thank you to the Academy. You know, there's one place that all the people with the greatest potential are gathered. One place and that's the graveyard."

"People ask me all the time, what kind of stories do you want to tell, Viola? And I say, exhume those bodies. Exhume those stories. The stories of the people who dreamt big and never saw those dreams to fruition."

"People who fell in love and lost. I became an artiste, and thank God I did, because we are the only profession that celebrates what it means to live a life," she said.

After her speech, the ceremony's host, writer-comedian-voice actor Jimmy Kimmel joked that she got nominated for an Emmy for that speech that made people cry.