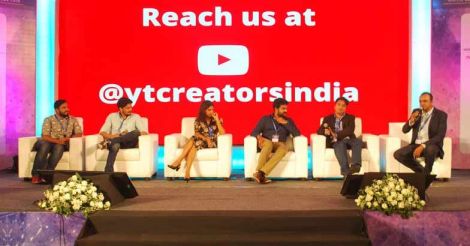 Kochi: Malayalam channels on YouTube are growing by leaps and bounds, as testified by one of the top honchos of the video-sharing website company. Videos with Malayalam content are keeping abreast the explosive growth witnessed in vernacular channels, YouTube entertainment division head Satya Raghavan said in a talk on the sidelines of Techspectations, a digital summit organized by Manoramaonline.

Internet penetration in India has gone a long way from 2006, when most consumers were focused on urban areas. Now the Internet consumer base is broad-based, and about 200 million of them access the net on smart phones.

YouTube videos have been growing at a rate of 80 percent. More and more users are taking to YouTube to circulate their own videos, a major shift from the television clips-dominated content just two years ago, Raghavan said, while moderating a session on videos.

Many of the Malayalam videos on YouTube maintained high standards and their subscribers came from across the world, Raghavan added. Malayalam content is expected to skyrocket in the near future. He, however, cautioned users to take extra care not to violate copyrights on YouTube.

Actor Archana Kavi said she took to YouTube as she wanted to do something on her own. She said she was a bit hesitant before taking on blogging as an actor but the support she received was tremendous. Malayalis across the world were eager to connect to the people of Kerala on social media, she said.

Fellow blogger and standup comedian Abish Mathew said YouTube provided an excellent market place for ideas. Localized content was better received, he added. Though the revenue per view was low on YouTube, Abish said he expected to overcome this limitation by adding more of his stage shows.

Sudev Nair, who acts in movies and web series, said web offered him more freedom. People say things like my grammar was not right when I am on TV but no one has bothered to react like this on the net, he said. He said he was even mulling to learn kalarippayattu to pep his shows.

Actor-producer Vijay Babu had his film house to thank for his greater involvement in social media. Though I worked with television for 14 years, my foray into cinema with a production house called Friday Films gave me an opportunity to get involved in social media. He said his course was suited for digital media. Social media helps in the marketing of movies, he added.

Babu said he had produced eight movies and most of them were directed by newcomers. He said he did not hesitate on putting his money on someone who he thought was talented.

NDTV Convergence chief sales and marketing officer Shouneel Charles said mobile phones were increasingly being used for shooting videos. The future belonged to videos but it would be wise to alter television content to suit the requirements of social media, he said.