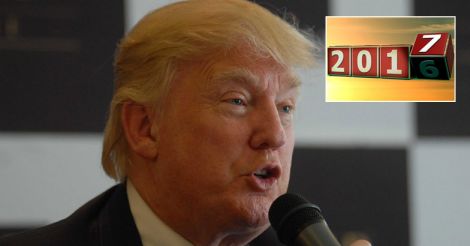 Washington: Donald Trump rewrote history with an incredible presidential run that made him Time's Person of the Year and catapulted him to the second spot on Forbes list of the world's most powerful.

A rank outsider with no government or military experience, the Manhattan mogul demolished two political dynasties - Bush and Clinton - to pull off a stunning victory over his Democratic rival Hillary Clinton with only half her billion dollar war chest.

Pollsters, pundits and his 16 Republican rivals - governors, senators and the son of a former president and brother of another among them - all took him as a joke with one scribe vowing to literally eat his column if the billionaire became the party nominee.

Yet as 2016 dawned, Trump with his promise to "Make America Great Again" by building a "big beautiful wall" to keep the job-stealing, "rapist" Mexicans out and barring all Muslims had emerged as the front-runner for Republican nomination.

One by one, his rivals fell by the wayside from "low energy" Jeb Bush to "Little Marco" Rubio to "Lying Ted" Cruz as the Democrats gleefully awaited his emergence as Grand Old Party's standard bearer smelling what they believed would be a cakewalk.

On the other side, the powerful Clinton machine overcame a serious challenge from self-styled Democratic socialist Bernie Sanders with the supposedly neutral Democratic National Committee coming to Hillary's aid as WikiLeaks later revealed.

Then, as Teflon Trump trained his guns on "Crooked Hillary" with ever-surging crowds at his rallies in battleground states chanting "lock her up" amid allegations of "pay for play" at the family charity, the chatterati insisted his primary tactics would no longer work.

President Barack Obama thought Americans were "too sensible" to elect Trump as he took on even the Pope for suggesting that he was not Christian for the mogul's plan to build that huge wall as top Republicans scurried away from him lest he may sink their boat too.

But with each insult, Trump's stock rose, with the brash billionaire warning that there would be riots if he was not named the party nominee.

And anointed he was, even as Ohio governor John Kasich stayed away from the party convention hosted by his state and an insulted rebellious Cruz invoked a "conscience" vote.

Back on the campaign trail, Clinton wondered why she wasn't 50 points ahead as she dumped half of her rival's "racist, sexist, homophobic, xenophobic, Islamaphobic" supporters into a "basket of deplorable".

But even the release of a 2005 tape of Trump trash talk with TV host Billy Bush about "grabbing women by the pussy" with impunity did not dampen the fervor of his supporters who took to wearing Clinton's insult on their tees with pride.

And it was the revenge of these "Adorable Deplorables" as they called themselves that saw Clinton's formidable "blue electoral firewall" crumble in battleground states to propel self-styled "Mr. Brexit" to a stunning victory on election night.

Clinton, who before the election was "horrified" at the idea of Trump not readily accepting the poll outcome, initially implored her supporters to give Trump a "chance to lead" before going into hiding.

But it wasn't long before she came out of her sulk to blame FBI director James Comey and Russian president Vladimir Putin for her stunning defeat, and openly came out in support of efforts to undo his election by any means.

Even as he mocked the CIA for suggesting that the Russians had hacked the Democrats to help him get elected, Trump continued his tour of battleground states to thank the still surging crowds that really brought his victory.

"Well, we all did it, together! I hope the "MOVEMENT" fans will go to D.C. on Jan 20th for the swearing in. Let's set the all-time record!" he tweeted before a rally.