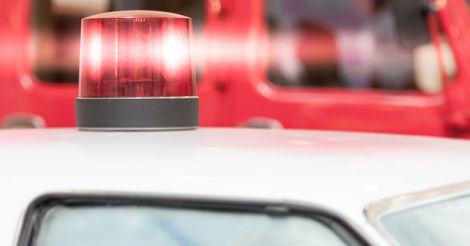 When the news about the ban on red beacon light was beamed enthusiastically on a national TV channel, I thought the “sadachara” police finally had its way. Citizens are already deprived of the elixir of life, which had intoxicated and inebriated them enough to serve the nation; they had been forced to turn a leaf to embrace vegetarianism leading them to a ‘seemingly’ long life because of the boredom; they were driven away from contemplating rape of females and males from 9 months to 90 years because of our vigilant police; and have they now closed the red light districts also?

More by the author: Birds of a feather? A president, a PM and a CM

Indian diaspora and its literary expressions

The sword of Damocles hanging over Indian Diaspora

But soon I realized that the revolution was not so fundamental and that what was going to go was one of the trappings of power politicians and bureaucrats – something they flaunted on their cars to enhance the value of their vehicles. The hashtag proclaims the objective of every operation in colorful terms like the most telling one that Kerala created for the high and mighty: “NeepodamoneDinesha.” This time it was plain “AllIndiansareVIPs,” which could be accomplished by either removing a million red and blue beacons or fixing beacons of every hue on a billion vehicles, including bullock carts and cycles. We could emulate either the Russians, who downgraded everyone from the Czar to “thavarish” (worker) or the Poles who elevated everyone into “pan”, meaning Lord.

The government simply removed the red beacon, leaving the many other trappings such as white lace curtains, Turkish towels with tri-color borders and a deep blue flag fluttering on their cars. None of these are banned as yet and hence, the hashtag, “AllIndiansareVIPS” will remain Utopian. The differences will be subtle, but you will recognize a VIP when you see one. Since police pilot cars and escort cars can have beacons, why are they needed on VIP cars to proclaim their power and influence?

One question I ask the burgeoning civil service aspirants is why they prefer the IAS and IPS as against the IFS, which was the favorite in the sixties and the seventies. Of course, they do not tell the truth and proclaim their ardent desire to serve the people or work at the grass root level. If probed further, they would say that they would like to have the power to transform the society. As though the IFS is a mere white elephant, which wallows in sartorial glamor and the single malt! The truth that will never be said is the attraction of the money that power brings to the corrupt bureaucrats these days. An IAS couple, who made a bed of currency notes for comfort may be an exception, but we accept without batting an eyelid when some, who are accused of corruption, produces evidence to show that they borrowed a few crores of rupees from a friend. Whether the red beacon goes or not, human ingenuity will create mental beacons to remain more equal than others.

The civil services aspirants have found out that IFS officers do not get a government vehicle or a flag till they attain the rank of Ambassador, while the domestic variety has a vehicle from day one with a driver and a PSO. Starting a frozen car in -50 degree Celsius in Moscow and keeping the car from burning out in +50 degree Celsius in Dubai are hazards that junior diplomats face. Driving in the kamikaze traffic of Tokyo and hanging out on “the longest parking lot”, which Long Island Parkway becomes in the “rush hours” are not the stuff that dreams are made on. Why should the young recruits go through such agonies when they can have the luxury of being driven to their place of work, with or without the red beacon?

Even if all such discriminatory practices are wiped out, how will anyone deal with the armed forces, which flaunt beacons, flags and stars even on the golf courses. They have no qualms about lining up several flag cars in golf clubs even during office hours. Of course, they have to stay fighting fit and what is better than a round of golf for their health? Who will discipline them when they are engaged in safeguarding the nation?

International practice today is for VIPs of all kinds to become more anonymous because of the increasing threat of terrorism. In Europe, where pomp and show were part of their tradition, even flags have disappeared from the vehicles of VIPs. Their lives are considered more important than their ego. Anonymity of the Indian bureaucracy has been lost long ago. Officers are vying with each other to grab headlines. With flags and beacons, anonymity has been replaced by showmanship and ego boosting. Hopefully, the new move towards “AllIndians areVIPs” will lead to the anonymity of bureaucrats. Their lives will also be less in jeopardy.

Equality, like monogamy, is a rare virtue, which cannot be enforced. The only ruler who brought in equality to his country was Gen.U Ne Win of Burma, who stopped all recruitment to civilian jobs and recruited everyone to the army and assigned jobs either in the armed forces or diplomacy or industry. Anybody could be assigned any job. Only once a year, they were permitted to wear their military uniforms, which revealed their ranks. Such equality will never come to India.

We are a deeply feudal, casteist and racist people. So whether red beacons disappear or not, our color, caste and power will brand all of us. Trappings of power may disappear, but our slavish mentality will maintain mental red beacons.