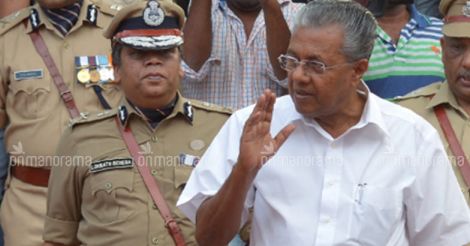 If one law applies to the Pinarayi government, it is the Murphy's law – if anything can go wrong, it will. The protest by the family of Jishnu Pranoy, the engineering student found dead in his hostel room in Thrissur recently, is the latest case in point.

The protesters, as announced in advance, gathered near the police headquarters (PHQ) in Thiruvananthapuram. The police prevented the protesters, including Jishnu's mother, Mahija, from proceeding to the PHQ gate as it was 'sensitive,' high-security area.

How 'Justice for Jishnu' protest blew up into a storm: as it happened | Video

DGP was ready to meet Jishnu's mother, cops only discharged their duty: Pinarayi

The police officers tried to reason it out with the unrelenting protesters. But it all started as Mahija swooned. A melee ensued and she was immediately rushed to Government Hospital, Peroorkada. Soon, youth organizations jumped in and tried to stop inspector-general of police Manoj Abraham at the hospital. Soon TV news channels aired video clips of an angry officer shouting down protesters and telling them 'not to play tricks with the IG.'

As protests raged on, CPM veteran V.S. Achuthanandan, in his usual style, fired the first salvo at the government. He called up the DGP and reportedly flayed the police action. Soon after, chief minister Pinarayi Vijayan asked the DGP to call on Mahija at the hospital. By then, Congress leaders, including former KPCC chief V.M. Sudheeran was at the hospital. The Congress was quick to seek the removal of the DGP. To add to the government's woes, the CPM district secretary too termed the police action unjust.

Where did the Pinarayi government err this time? The police, which displayed sobriety at the start of the protest, lost it midway. They failed to gauge the sensitivities and agony of a family, which was seeking justice for their lost child.

On the same page

The protest would have been peaceful and issue-free had the police dealt with it more diplomatically. This is especially so because the government and the family were never on two pages on the issue. The government was ready to grant any wish of the family – a meeting with the DGP, a fast probe, and bringing to book the culprits. In spite of it, the agitation and its handling veered off course and ended up in a street wrangle giving ample space for the opposition to garner political mileage during the critical run-up to the Malappuram by-poll.

So, how does Murphy find its space in the scheme of things? Murphy plays out in Pinarayi Vijayan being the most inaccessible communist chief minister Kerala has seen. Murphy plays out time and again when the Kannur strongman, who has the government machinery at his disposal and the complete backing of his party, fails to shake away the dogma baggage. Probably, the party and its leader may take a cue from the old KPAC song 'mattuvin chattangale' (alter the rules). Otherwise, Murphy could show up to disastrous consequences. And, as the anecdote goes, even the most innocuous of invertebrates may spew venom and sting hard.

(The views are personal)