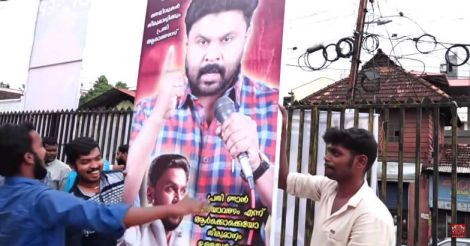 Dileep fans celebrate the release of Ramaleela in Kottayam.

Every single action and reaction relating to the February 17 actress attack case has been sensational and emotional, thanks to the celebrity quotient associated with the incident. While the police action and court procedure, especially since the arrest of actor Dileep on charges of conspiracy, made sensational headlines, reactions from both those who stand with Dileep and those who sought justice for the victim were highly emotional.

The pro-Dileep gang, like a true mob, went berserk on social media hurling abuses on those who hailed the police move and called for justice to the attacked actress, even as an enraged group of activists called for a boycott of the Dileep-starrer Ramaleela which was released this Thursday. A noted film critic, otherwise known for his left-liberal views, even called for burning down the cinemas where the film would be played. He later withdrew the post and admitted that it was an emotional outburst.

Days after Lal Jose claimed that the positive...

Dileep plays the role of Ramanunni, the son of...

We woke up to another emotional outpouring, which is dangerously fanatic, when filmmaker and Dileep's long-term friend Lal Jose took to social media to hail the rave reviews Ramaleela received on the release day. In his Facebook page, Lal Jose shared a poster of the film which hailed the projected success of the film as a verdict in favor of Dileep in the people's court.

Cinemas as people's court! Where? Definitely not in a democracy.

Lal Jose has been defending Dileep as a true friend ever since the actor's name cropped up in the case. And he has every right to have his conviction. However, hailing the so-called fans -- a group of youngsters who prefer to keep their brain outside theaters and get an adrenaline rush at the mere sight of their macho heroes -- as a sublime concept of a people's court demanded extraordinary courage from the filmmaker.

Critics were quick to point fingers at Lal Jose, claiming that their call to boycott the film was right.

Lal Jose's argument is, undoubtedly, an open challenge to the judicial system of the country and thus the idea of democracy. The director was purportedly trying to prove that the decisions of the Kerala High Court and the trial court at Angamaly to deny bail to the actor were wrong.

Lal Jose and all others who support Dileep, including outspoken politician P.C. George, have been arguing that Dileep was innocent and being implicated in the case by the police at the behest of some powerful conspirators. However, they have not been able to produce any evidence in this regard, while the court disposed the actor's bail plea on the basis of whatever evidence the police have produced.

Calling for a boycott is fascism, be it on beef or movie: Arun Gopy

'Ramaleela' was Arun’s pet project – something...

Joy Mathew says that the movie and its director...

At such a juncture, any level-headed person is only supposed to wait for the court of law's final verdict which may convict or acquit the actor, purely based on the presence or absence of evidence.

However, people like Lal Jose, stooping to the level of partisanship, are not in a mood to wait. They rubbish the judiciary and its procedure and seek to establish a parallel court, which can only function in a Banana Republic.

The first-day-first-show rush for Ramaleela was only a natural phenomenon in a community like ours which is obsessed with stars and celebrities. The aggressive marketing campaigns, which in case of Ramaleela went to the extent of showing Dileep in tears on TV screens, as well as innumerable TV debates on the film's release, added to the hype surrounding the movie.

The true verdict of the film has yet to be out and no wonder it would shoot up to a success if the film has got the right elements to satiate the feelings of a usual cinema-goer, be it a Dileep fan or not. Because that's how this popular art form functions.

However, connecting the film's box office performance with the status of the ongoing case makes absolutely no sense. For the sake of argument, one may agree that Dileep is innocent because a crowd decided to watch his latest film on day one and give a positive review. What if it had happened the other way? No crowd and negative reviews! Would that have meant Dileep is a convict? Lal Jose, find an answer and learn the art of dignified silence before you come up with your next book of revelation to which your people's court showed no mercy.