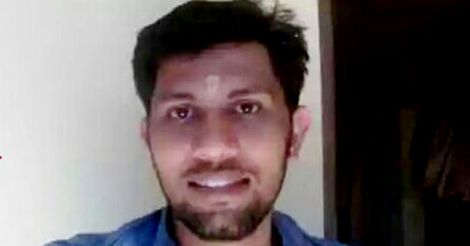 Ramith who was killed in the attack. His father was also a victim of political murder.

Kannur: In what looks like a tit-for-tat political attack, a BJP worker was hacked to death by unknown assailants in broad daylight at Pinarayi in Kannur district Wednesday, two days after a CPM worker was killed in a similar manner.

Ramith (29), the deceased, was attacked by a group of assailants near his house around 10.30 am. He suffered severe injuries on his neck, face and head.

Though he was rushed to the General Hospital in Thalassery, he was declared dead on arrival.

Ramith's father Uthaman was also a victim of political violence. Uthaman was killed in 2002 by CPM workers, who forcefully dragged him out of a bus he was traveling in and hacked him to death.

Ramith is unmarried and is survived by his mother Narayani and sister Ramisha.

BJP has called for a dawn-to-dusk hartal (6 am-6 pm) in the state Thursday (October 13), protesting the murder.

BJP hartal in Kerala tomorrow, here's a heads-up in points

All exams of Mahatma Gandhi University, Kannur University, Calicut University and Cochin University of Science and Technology (CUSAT) scheduled Thursday have been postponed in the wake of the hartal. Revised date of exams will be announced later.

Due to the shutdown, the schedule of north zone school games has been changed. Contests of October 14 (Friday) will now take place October 15 (Saturday) and competitions of October 15 will be held October 16 (Saturday). There are no changes to contests scheduled for October 16.

BJP alleged that CPM is behind the murder and launched a scathing attack on chief minister Pinarayi Vijayan. Pinarayi is the home town of the chief minister.

“It is very unfortunate that a BJP activist was killed by CPM terrorists; we strongly protest this,” Kerala BJP spokesperson M.S. Kumar told ANI.

Police have deployed personnel in large numbers as the district remained tense in the wake of the two political murders which took place in a period of two days in CM Pinarayi Vijayan's constituency Dharmadom.

It was on Monday that CPM's local leader K. Mohanan (40) was hacked to death by six people at Pathiriyad in Kannur district. The assailants have not been identified yet and police have intensified search for the culprits.

CPM has alleged that BJP workers were behind the attack and observed a hartal in Kannur district on Tuesday.

Kannur has witnessed a series of attacks on political workers in the recent past.

While the Kerala CPM is keen on making the Jose faction an ally, the CPI is against it.