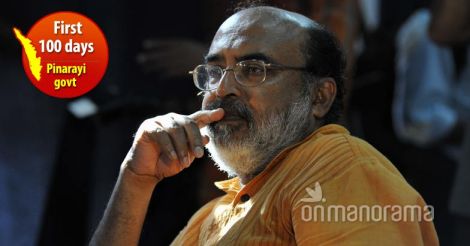 Thiruvananthapuram: On the eve of the Pinarayi Vijayan-led LDF government in Kerala completing 100 days in office, State finance minister Thomas Isaac on Wednesday said the government was planning to take the public health and education sectors to greater heights.

However, the Congress-led opposition and the BJP have termed the performance as a lack lustre one.

"The foundation has been laid and we are planning to take public health and education to newer heights. Even while the state is facing a financial crisis, we have been able to raise the minimum pension to Rs 1,000 and the total outgo including arrears has started to be paid out. A total of Rs 20,000 crore will be set aside for investment in infrastructure every year for the next five years," said Isaac.

On May 25, Vijayan was sworn in after registering a stunning victory, winning 91 seats in the 140-member Kerala Assembly.

Leader of opposition Ramesh Chennithala said even though it's early days yet to make an assessment, there is nothing much in what the LDF government has done in the past 100 days.

"There have been more misses than achievements. The head of the police force has apologized on more than one occasion. As things stand now, things are in slumber and files are piling up as nothing appears to be moving," said Chennithala.

Vijayan faced flak over the appointment of his legal counsel M.K. Damodaran as his advisor and following the criticism, Damodaran did not take up the post.

Also Vijayan has been ducking the media and has canceled the custom of briefing the media every Wednesday after the weekly cabinet meeting.

In the past 100 days he has met the media just twice. Thursday's meeting with the media here has been canceled following the death of a senior party colleague V.V. Dakshinamoorthy.

State BJP president Kummanam Rajashekeran said that he cannot give even 10 marks out of 100 for the first 100 days of the new government.

Nearly 55 gm of the yellow metal has been used in making the mask, businessman Shankar Kurhade, a...