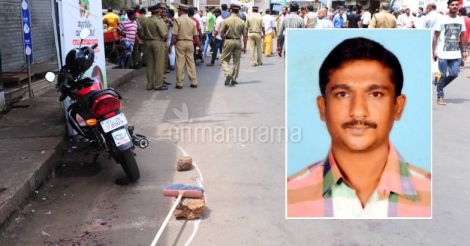 Kannur: An activist of Social Democratic Party of India (SDPI) was hacked to death in Kannur in a suspected case of political vendetta Thursday.

SDPI Neerchal unit president Farooq was hacked to death near a hotel in Kannur city around 11 am. Farooq was rushed to hospital, but his life could not be saved.

SDPI alleged that Indian Union Muslim League (IUML) activists were behind the murder.

Police have taken Abdul Rauf, a native of Kannur, into custody in connection with the murder.

An unconfirmed report said that Farooq was killed after a spat over ganja smuggling.

BJP is observing a dawn-to-dusk hartal in Kerala Thursday, in protest against the murder of party worker Ramith in Kannur's Pinarayi.

This is the third murder reported from Kannur in four days.

CPM activist and toddy shop worker Mohanan (40) was killed by a six-member gang at Pathiriyad in Kannur district Monday, with CPM pointing fingers at RSS cadres for the attack

Several incidents of violence were reported from across the state in connection with the BJP-sponsored hartal.

The direction came on a petition filed by the legislator's secretary Pradeep Kumar in the Kasaragod...