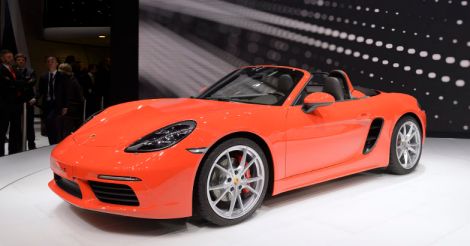 New Porsche 718 Boxster S is on display during the press day at the 86th Geneva International Motor Show in Geneva, Switzerland. Photo: AP

More than 120 new models from manufacturers across the world will be introduced at the 86th edition of Europe's flagship auto show, with industry leaders boasting of a positive mood after the financial crisis of 2008-2013 fades for some consumers.

That optimism comes despite the ongoing fallout from the Volkswagen pollution scandal.

The show opens to the public on March 3, but offered a tantalising peek at what would be on view with a ceremony awarding Opel/Vauxhall the coveted Europe's Car of the Year title for its 2016 Astra.

It beat off six challengers, including the Audi A4, the BMW Series 7 limousine, the Jaguar XE, Maza MX-5 roadster, the Skoda Superb and a Volvo 4x4, the XC90. An Opel-Vauxhall Astra model car is displayed after being awarded "Car of the year 2016". Photo: AFP

It was the third time Opel has taken the big prize at the Geneva show, winning with a hatchback the 58-member jury of motoring journalists deemed "good value for money", combining a compact frame with a roomy interior, a statement said.

While more practical, even modestly priced cars often win the top award, the Geneva show is synonomous with luxury and performance and the 2016 edition is unlikely to disappoint.

Bugatti is set to unveil the Chiron – successor to the Veyron – which aims to take its place among the most powerful and fastest cars in the world. 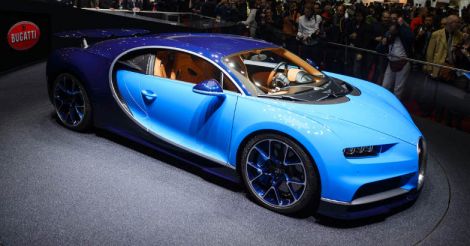 A Bugatti Chiron car model is displayed during the press day of the Geneva Motor Show. Photo: AFP

At an estimated price of two million Euros ($2.2 million) it is also one of the most expensive.

Appealing to a broader market, the Geneva show includes a full line-up of 4x4s, or SUVs – a segment that now accounts for around 22 percent of overall European sales.

With oil prices plummeting from more than $100 in 2014 to below $35 a barrel on Monday, analysts said cheap fuel is making hybrid cars less of a priority for some buyers.

Last year's Car of the Year winner was Volkswagen's Passat, but the company is expected to keep a low profile this year after the scandal that followed revelations its diesel engine cars were secretly outfitted with devices to cheat US emissions tests.

Analysts said the plight of the German car giant, which controls nearly 25 percent of the European market, will dampen the mood in Geneva.

"Volkswagen will be more modest than usual. The company is trying to appear more open, more transparent and we should see this new culture in Geneva," said German car expert Stefan Braztel.

Volkswagen faces potentially huge damages as a result of the scandal, after about 200 owners of VW, Audi and Porsche diesel vehicles filed a class-action lawsuit in San Francisco earlier this week.

The suit accuses Volkswagen of major damage to the environment and to owners of more than a half million of the cars sold in the United States.

In Geneva, the biggest European show since the scandal broke, Volkswagen will seek to change the gloomy narrative surrounding the brand.