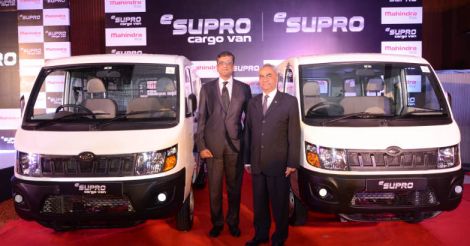 eSupro platform, which has a range of 112 Km on a full charge is ideal for city transportation and would cater primarily to the b2b segment, M&M said.

"The launch of eSupro will usher in a whole new concept in emission free cargo transportation and people movement. Going forward, eSupro would provide a much needed fillip to companies in the b2b and e-commerce segment," said M&M president and chief (automotive) Pravin Shah.

eSupro, has a lithium Ion battery and takes 8 hours 45 minutes for full charge. It would have a top speed of 60 km.

"In other markets, it would cost more as in Delhi, the price includes FAME subsidy given by the government for the electric vehicles," he said.

The company would first concentrate on the top metro cities with eSupro and later would go to tier II markets, he added.

This is third electric platform from $17.8 billion Mahindra group after e2o and eVerito. In April this year, the company had introduced e2o in the UK market.

"Today with our range of electric vehicles we can reach out to an entire spectrum of consumers across segments in people and goods movement," Shah said.

The company has already got a order to supply 50 vehicles to online grocery store Bigbasket and in talks with the online tax aggregator Ola.

In 2015, globally battery electric vehicle (BEV) had a growth of 59 percent. In countries such as China BEV had 40 percent growth.

However, in India the growth last year was only 1 per cent and has only four lakh BEVs and four thousand electric cars.

"However, this number would go up in the coming years with growing awareness and advancement of the technology," Mathew said.