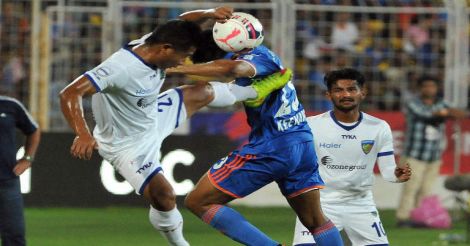 Margao: Seeking to culminate a journey so far characterised by ups and downs, highs and lows, on a triumphant note, FC Goa and Chennaiyin FC lock horns in what promises to be a cracker of a title clash in the Indian Super League (ISL) here on Sunday.

Playing in front of their home crowd at the Jawaharlal Nehru Stadium, FC Goa are expected to have a slight edge going into the big match against a team that has had a roller coaster ride over the past two-and-a-half months.

Both teams have faced each other on four occasions with FC Goa and Chennaiyin FC winning two apiece.

Interestingly, both the finalists failed to capitalise on the home advantage, only managing to win their away fixtures.

If Chennaiyin's story was a typical roller-coaster ride with heart-wrenching lows and exhilarating highs, FC Goa too had a bumpy ride.

A peek into the table may give one the impression that the journey to the final destination was a smooth one but the Goans know that the reality is something else.

While they kept three clean sheets on home soil, Goa never won more than two games in succession this year and their longest unbeaten streak has been a stretch of four matches which featured two wins and two draws, culminating in their 7-0 blitz of Mumbai City FC - the biggest win in the history of the franchise-based league.

The Goans' forte is scoring goals and they topped the league standings with 29 strikes prior to the final. The attacking style of play, however, also caused their legendary coach Zico problems as they suffered heavy 4-0 and 4-1 defeats against Chennaiyin FC and Atletico de Kolkata.

Zico's side will be boosted with Rafael Coelho being declared fit after the Brazilian striker was stretchered off in the second leg of the semifinal against Delhi Dynamos.

FC Goa have a host of strikers to play alongside Coelho with Dudu Omagebmi making a strong case after a powerful performance against Delhi Dynamos earlier this week. They also have Thongkhosiem Haokip, who combines well with his fellow attackers. Victorino Fernandes and Chinadorai Sabeeth are the other options.

Scoring goals has not been an issue for Goa this year. Three of the eight hat-tricks this season have come from Goa with Dudu, Thongkhosiem Haokip and Reinaldo all etching their names into the record books.

Reinaldo, who has seven goals and four assists to his name, may not be 100 per cent but Zico mentioned that the Brazilian striker could play a part in the finale.

Laxmikant Kattimani is likely to be the preferred custodian as he has conceded just 13 goals in the 12 matches he has played in. Marquee signing Lucio will be expected to lead the defence alongside Gregory Arnolin with Pronay Halder once again expected to play the role of a third centre-back.

In the middle of the park, Leo Moura's ability to keep the ball and pass at will has been a highlight of their campaign and will be a key factor again. Aiding Moura in midfield will be Jofre Mateu, whose performances in the last few games had been key to Goa's fortunes.

Chennai's chances of qualifying for the semifinal were slim after a run of reverses that saw them languishing at the bottom of the league after 10 matches.

Marco Materazzi's men began the turnaround by beating Kerala Blasters FC 4-1 win with Stiven Mendoza netting his second hat-trick of the season. They followed that with a 4-0 win over high-flying Delhi Dynamos FC, before posting another convincing 3-0 victory over Mumbai City FC. Then they saw off defending champions Atletico de Kolkata with a commanding performance at home and the defeat in their away game did not hamper their chances of qualifying for the final.

While Mendoza has been in great form and will definitely be a factor in the final tomorrow, Chennaiyin FC's strong point is that they have arguably the best goalkeeper over the course of two seasons in Apoula Edel.

Mailson Alves is likely to partner Bernard Mendy in the centre-back role with Dhanachandra Singh and Mehrajuddin Wadoo as the two full-backs. Harmanjot Khabra and Manuele Blasi would pair up in the middle of the park.

"There are no injuries. You fear muscle injuries which Raphael and Dhanpal (Ganesh) had. We are ready for the final whether 90 or 120 minutes," Materazzi said.

Thoi Singh has also been an admirable performer for the Chennai outfit. It remains to be seen whether Materazzi start with Elano Blumer or Bruno Pelissari, and he also has Fikru Tefera as an option.