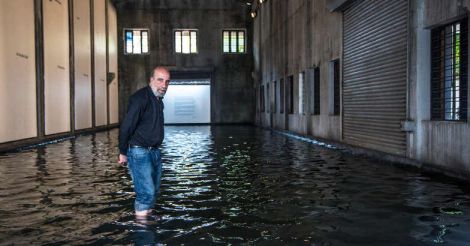 'Sea of Pain' by Raul Zurita (in photo) shares the grief of refugees across the world. Credit: KBF

Perhaps no other poet in the world makes use of space as a prominent medium the way Raul Zurita does. Once he wrote a poem in the skies of New York City; on another occasion, on the sands of Sahara Desert.

The Chilean master believes that how you present your words is as important as what they mean. His poems are to be seen and felt, not just to be read. And he repeats his experiment with mediums at the ongoing edition of the Kochi-Muziris Biennale where his “Sea of Pain” has been drenching the visitors knee-deep in a touching poetry experience.

“Sea of Pain” is a poetry installation, which is as deep as an ocean in terms of the multiple layers of meanings and emotions it conveys. Installed in a lengthy storeroom at Aspinwall House, the work has three layers – a replica of the rippling sea, words written on tall walls on both sides and a poem at the wall on the end of the room.

Of poetry that outlives tyranny: Interview with Raul Zurita

Art Review | The Biennale washroom you should not use

You may enjoy the walk through the cold waters first, but you won’t be able to walk back with the same ease after reading the poem, which is titled “Sea of Pain”. After reading the poem, you will realize that your feet are immersed in an actual sea of pain, where thousands have drowned in their voyages seeking better life.

In the poem, Zurita, a poet known for voicing the pangs of humanity, speaks of Galip Kurdi, the brother of Alan Kurdi, the Syrian toddler who drowned in the Mediterranean Sea while trying to seek refuge in Europe. While the photo of Alan Kurdi’s body lying on the sea shore became a disturbing symbol of the refugee crisis across the world, no one mourned the death of his brother who drowned in the sea the very same day. “I’m not Galip Kurdi’s father/ but he is my son,” Zurita writes at the end of the poem – perhaps one of the most powerful literary expressions of our times.

Speaking on behalf of the millions of refugees across the wold, Zurita raises some inescapable questions to the privileged and the powers that force people out of their homelands. “Sea of Pain” thus remains one of the most political piece of work at the third edition of the Kochi-Muziris Biennale.

The poem might evoke the same responses even if it’s printed on paper. But by placing it in sea water, Zurita offers a kinetic experience, which makes an enthusiast a part of the art.

This reporter remembers asking Zurita about his next work when he visited Kochi last year, after being announced as the first artist of the Biennale. “It will have to do something with space,” he said. Zurita kept his word: there stands the “Sea of Pain” amidst a sea of other diverse art forms.

Having suffered brutal torture in the hands of the police of the Pinochet regime in Chile, Zurita looks as delicate as the ripples of the installation. However, his poetry, that represents the collective voice of humanity, seems stronger than ever before.