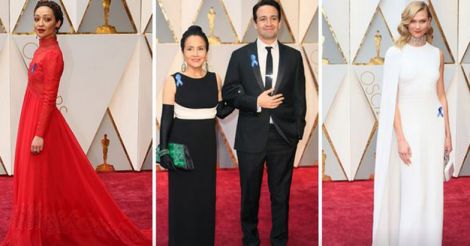 A number of Oscar nominees have thrown their support behind the organisation which first challenged Trump's travel ban.

The award gala is being held at Dolby Theatre here on Sunday.

The blue ribbon represents the American Civil Liberties Union (ACLU) and is part of their new initiative titled Stand With ACLU.

Irish-Ethiopian star Ruth Negga, who is up for Best Actress for her role in Loving, was first on the red carpet and sported the political accessory on her red Valentino dress, reports telegraph.co.uk.

Negga was followed by the Hamilton creator Lin-Manuel Miranda and his mother who both wore the pin. Miranda is nominated for writing music and lyrics for 'How far I'll go' from animated movie Moana.

Director of best film nominee Moonlight, Barry Jenkins, was also spotted with the blue bow pinned to his suit.

The ACLU was among the first to launch a legal challenge following Trump's travel ban, which bars people from seven Muslim-majority countries entering America.

Other stars with blue ribbons were Karlie Kloss, Casey Affleck and Benj Pasek.