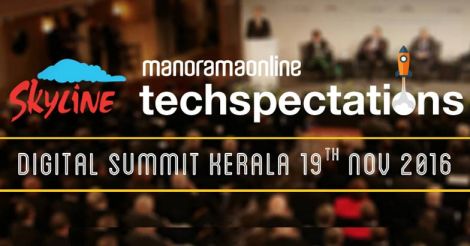 Kottayam: Techspectations 2016, the first national-level digital summit in Kerala, will see well-known names in technology discussing some top-of-the-mind topics: digital, social, mobile, video and startups. The event, hosted by Manorama Online, the digital media leader in Kerala, will be held in Kochi on November 19, and will see attendance from a phalanx of digital leaders from southeast Asia. The summit, which will be an annual feature, is being held as part of the 20th anniversary celebrations of Manorama Online. Skyline is the main sponsor of this summit.

Manorama Online was recently given the coveted Wan-Infra award for the best news site in South Asia, beating some established industry players. Onmanorama, the English language portal of Manorama Online, also figured in the top 3 bracket.Here's a line-up of the star cast of digital leaders who will attend the summit:

Vidyasagar is an experienced executive in the TV and online video industry. He studied economics at the University of Madras and obtained two post-graduate certificates from the Indian School of Business.

Bikram Singh Bedi is the Head of India for Amazon Internet Services Pvt. Ltd. Bikram leads the team that helps businesses of all sizes across the region learn about the Amazon Web Services cloud computing platform, allowing them to save money, accelerate their time to market, and focus on their core business. Bikram has over 19 years of experience including managing various businesses in senior leadership roles across ASEAN, Asia Pacific and India geographies for various IT and Telecom-based products and services organisations like IBM and Oracle. Prior to joining Amazon, Bikram’s last assignment was as the VP of the Middleware business at Oracle India.

Kiruba Shankar is CEO of Business Blogging & founder Director of F5ive Technologies. He is the host of Manorama Techspectations Media Summit. He has 20 years of work experience in Internet space and helps craft digital strategies for large firms. He has worked with leading brands such as British Council, Dominos Pizza, Murugappa Group, Mahindra Group, Sterling Holidays, Larsen & Toubro and The Hindu Newspaper Group. He has authored five books and has been a technology columnist for newspapers such as Business Standard, Financial Express and The New Indian Express. Kiruba has been teaching for 16 years and is a Professor of Digital Marketing. He has taught at leading B-Schools. He is a professional speaker and has delivered over 500 talks at conferences and corporate events. He will be the host for the event.

Rehan yar Khan is a venture capitalist and founder and operator of Orios Venture Partners.,a Mumbai-based venture fund for technology startups. Orios is the largest domestically raised venture capital fund in India.He is recognized as one of India's leading early-stage technology investors. Starting with Druva in 2008 he have led over 17 startup investments in India Druva,Jigsee (acquired by VuClip), PrettySecrets, OlaCabs, Groffr and Sapience to name a few

Shan Kadavil is the CEO & Founder at www.freshtohome.com- a young and enterprising start-up with a passion to disrupt the traditional supply chain of fresh food produce in India. Freshtohome.com is currently India’s leading online market place for Fish n Meat and connects over 60,000 customers directly with the fishermen & farmers. Shan is also a serial enterpreuner and an accomplished tech leader. In his prior role, Shan was the India Country Manager for Zynga – a leading social gaming company and maker of popular titles such as Farmville and MafiaWars. The India studio founded by Shan was the second largest in the world for Zynga and ran a large part of its gaming portfolio. Shan is also a true blood Malayalee and likes his fish for breakfast, lunch & dinner!

Bedi has been managing director of India at Facebook, Inc. since July 2016. Bedi has two decades of leadership experience covering sales, marketing and partnerships where he successfully built teams and grew businesses for multinational companies. He served as Managing Director of Sales and Marketing for South Asia at Adobe Systems Incorporated from May 2011 to June 24, 2016. Bedi led Adobe's sales and marketing operations for India and SAARC and was responsible for driving strong growth for Adobe in key verticals including education, government, enterprise and the booming Indian creative industry. Prior to joining Adobe, he served Intuit India as its managing director. Bedi has rich experience of managing leadership roles at organizations like Symantec, Sun Microsystems and Wipro.

Those who are interested in attending have to register first on the Techspectations 2016 website. Hurry, because the seats are limited!