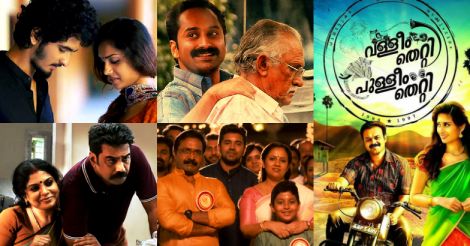 (Disclaimer: The songs mentioned here are the personal favorites of the writer, from the gone year. When it comes to music, the taste varies from person to person and we’d love to know which all Malayalam film songs of 2016 are your favorites – leave them as comments at the bottom of this article. Mind you, this list was prepared omitting songs from the movies that will be released only in 2017.)

Here are my top 20 picks of Malayalm film music from 2016 – in the order of preference.

Credits go to composer Jakes Bejoy for bringing in Shreya Ghoshal on the vocals along with him for this funk, retro item song which is a fun respite for the gifted singer from the romantic numbers she usually sings in Malayalam.

Vidyasagar confidently throws in nadaswaram to go with electric guitar and drums to power this mighty catchy track and singer Niranj Suresh packs it with oomph with the punchy ‘ithaanu kaavya nayakan’ line.

Composer Mohan Sithara proves that he is still very much in the scene with this highly enjoyable track, sung wonderfully by Joyce Surendran, from the less-heard children’s movie Mud Maza.

Composer Rahul Raj, who has a good number of melodies to his credit in 2016, works his magic in this breezy romantic number sung by the trustworthy talent that Najim Arshad is.

Music director Shaan Rahman has been in fine form throughout the year and ‘Thennal Nilavinte’, sung by his buddy Vineeth Sreenivasan and Aparna Balamurali, is a lovely, breezy melody.

Shaan has a great tune and he serves it intact to the audience by sticking to the basics, and also by picking the much-effective pair of singers - Vijay Yesudas and Shwetha Mohan.

We have hardly heard composer Gopi Sunder singing a full-length melody, and when he does that here, it turns out to be elegant.

Composer Sooraj Kurup gets everything right in this wonderful song – be it the lively nadaswaram and mridangam throughout the track, the Carnatic violin portion, the rich melody and the brilliant rendition of Haricharan and Madonna Sebastian.

Tuned by John P. Varkey, this song takes its time to evolve and rushes to an end as we fall in love with it, leaving us with only one option – play it again, letting ourselves fall in a trance.

This gleeful Onam song shows off Shaan’s melodic prowess yet again, and he has employed the vocals of two marvelous singers for it – Unni Menon and Sithara Krishnakumar.

Rahul Raj does a retro-gangster turn efficiently for ‘Rambo’ which has splendid violins as its backbone; credit equally goes to Vijay Yesudas for his energetic rendition.

If ‘Thiruvaavaniraavu’ was 2016’s Onam song, ‘Gabrielinte’ was the easy pick for Christmas; flautist Vishnu Vijay deserves all the praise for his debut as composer.

Sung by Rinu Razak and Shaan Rahman, the composer himself, this song boasts of all the quality elements that Shaan’s music is known for.

Sachin Warrier, who made a promising composer debut in Aanandam, picked Ashwin Gopakumar, lead singer of 'When Chai Met Toast', and his sister Sneha Warrier to render this marvelous melody.

Darvinte Parinamam was the young Sankar Sharma's debut film as music director and he came up with four quality tracks, of which 'Ta Ta Ta Tang' is the most innovative.

Bijibal’s brilliance, as a composer and singer, is in fine display in the 'Idukki' song where he gives Rafeeq Ahmmed's simple, smile-evoking lyrics the right treatment, keeping to minimal instruments while executing a soulful rendition.

Composer Prashant Pillai makes good use of his Carnatic and Western music knowledge to produce a lovely fusion and singers Mathangi & Haricharan are brilliant with their vocals.

Sushin Shyam of thrash metal band 'The Down Troddence' composed just one song for Kismath, and won us over with this exquisite, haunting melody, sung soulfully by Sachin Balu.

Sooraj Kurup adds fine creative layers of programming to build this track, sung addictively well by Vijay Yesudas and Sithara, and his imaginative loops give you a musical high and you want to go back to this song.

Now, the following are 15 other songs which just about missed out on making the top 20 favorite songs list. The songs are listed in no preference order.