Kottayam: Two massive landslides, one at Puthumala in Kerala's Wayanad district and the other at Kavalappara in the neighbouring Malappuram district, within a span of few hours, had sent shock waves across the state. Both regions were marked out as highly vulnerable to landslides.

The eerie similarities in these two calamities, and the extent of the destruction caused show how vulnerable the state is to landslides.

A map released by National Centre for Earth Science Studies in 2010 showing Bhoodanam in Malappuram. 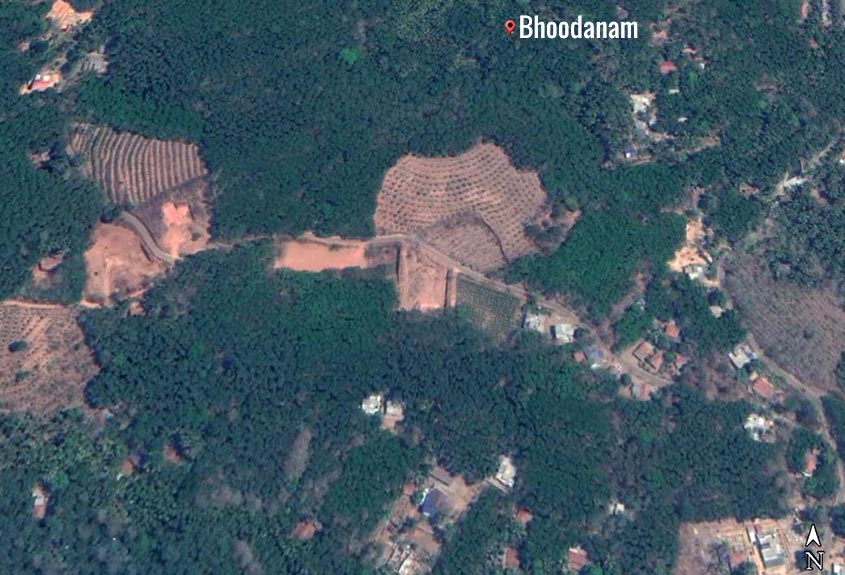 A map released by National Centre for Earth Science Studies in 2010 showing Puthumala region in Wayanad. The areas marked in orange are moderately prone to landslides. 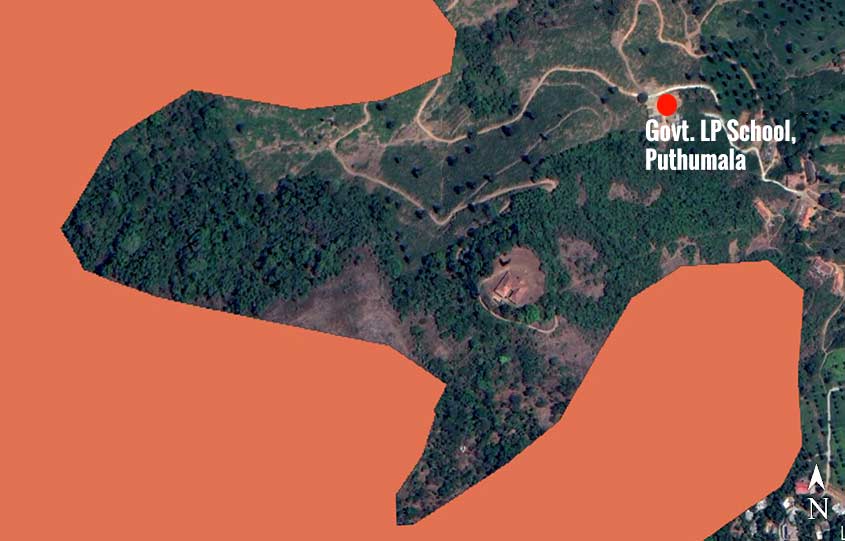 Incessant rain pounded the region of Puthumala first. Then floodwaters swept away the village. Stones, mud and trees rolled down with a loud explosion as both sides of a hill gave away.

The landslide occurred at Puthumala around 5pm on Thursday.

The nature dealt a similar blow to the neighbouring Malappuram district, where another landslide wreaked havoc at Bhoodanam at Kavalappara on Thursday night. A loud explosion had rattled the entire region. Only on Friday morning, that the outside world came to know that an entire village had been buried under swathes of mud and rocks.

Kavalappara was among the 10 places that were marked as highly vulnerable to landslides, as per the list released by the Kerala State Disaster Management Authority in 2016. Ten taluks were named on that list. Kavalapra is part of the Nilambur taluk on it. 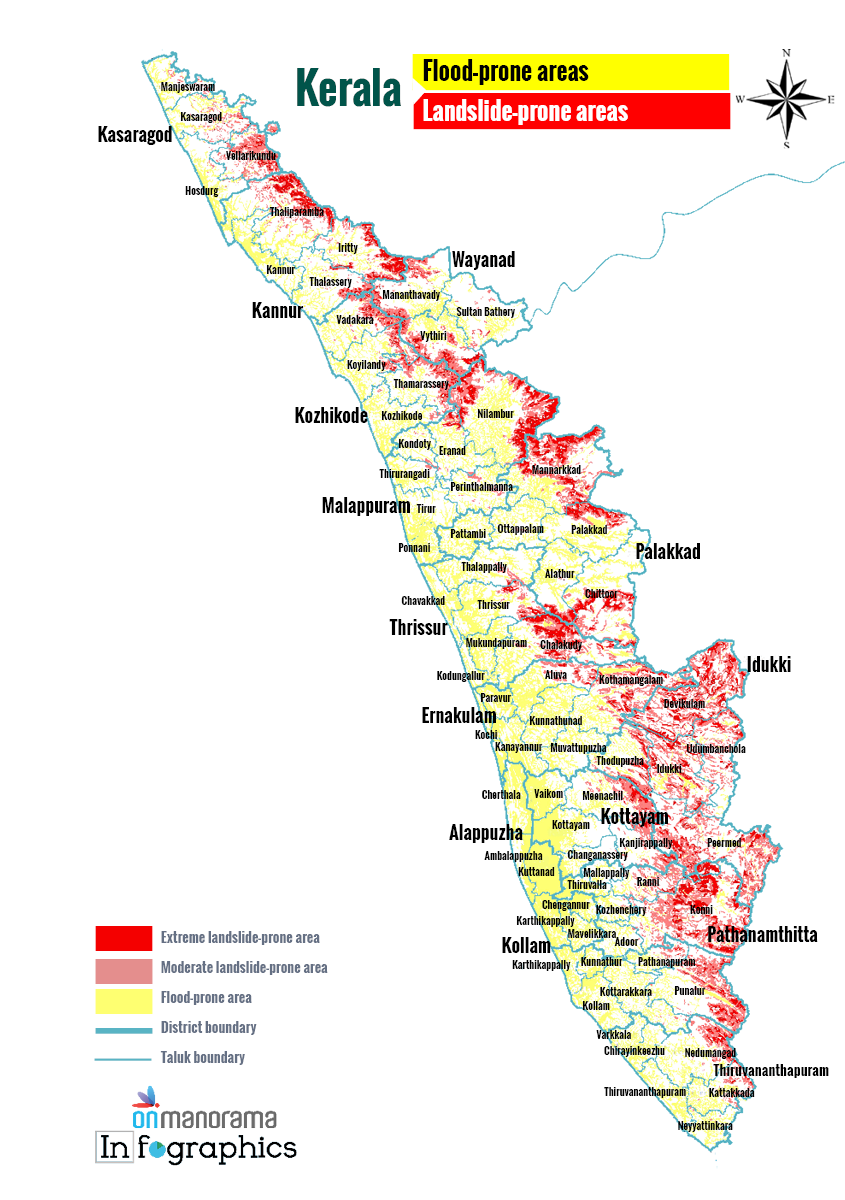 A map of Wayanad showing regions which are highly vulnerable (red) to landslides and moderately prone (orange). Courtesy:National Centre for Earth Science Studies 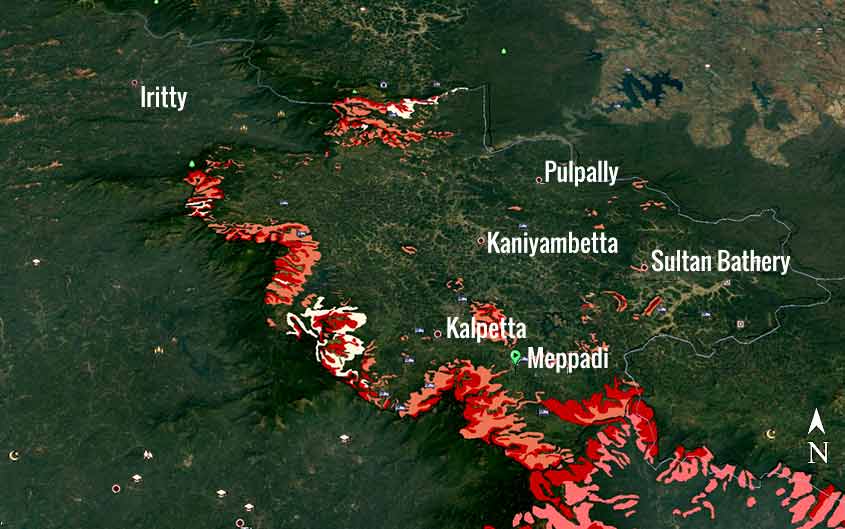 Areas near Puthumala, including 900 Kandi estate, are marked as high (red) or moderately (orange) vulnerable to landslides. Courtesy:National Centre for Earth Science Studies 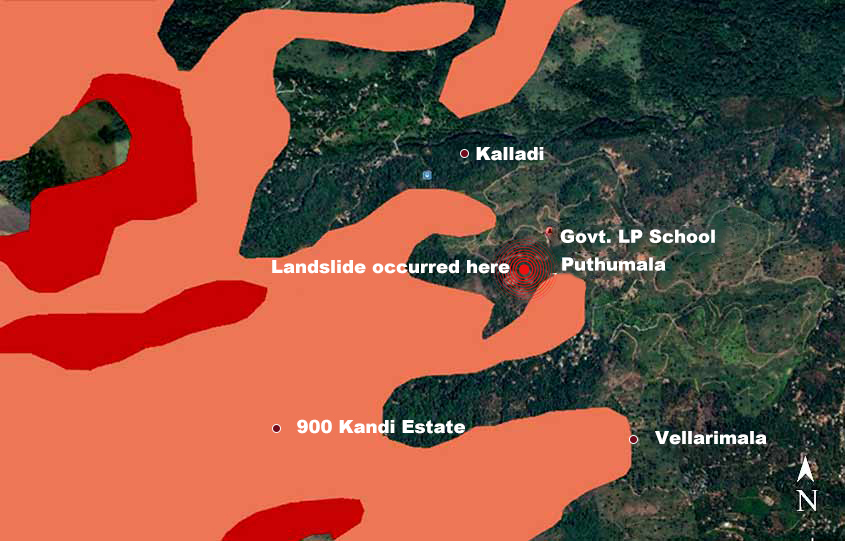 Meppadi in Wayanad was on the list of areas vulnerable to landslides, as per the report issued by the Geological Survey of India (GSI). Puthumala is near to Meppadi.

The plantation village of Puthumala is approximately 20km away from Kalpetta in Wayanad. So far nine bodies have been recovered from the accident site. The village on a 5km stretch with an area of 100 acres has now been rendered as a sludge ground. Around 60 families lived in this area. Fearing a calamity, several residents had moved to the camp at the nearby government LP school. The landslide occurred about 1km away from this site. The area known as Pachakkad had collapsed as the calamity struck. A landslide had struck this area around 30 years ago.

Bhoodanam is around 25km away from Nilambur. Around 1km from this site is Kavalappara, where the landslide wreaked havoc. The area of 10 acres has been buried under mud and rocks. It is suspected that about 30 people of the 19 families in the region are trapped under the 50-foot tall debris. Around 14 bodies were recovered by Sunday. 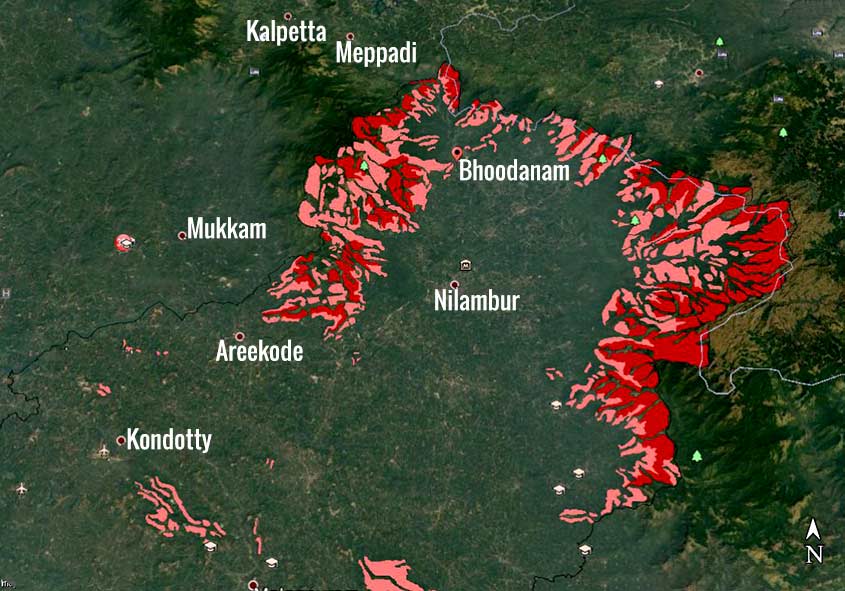 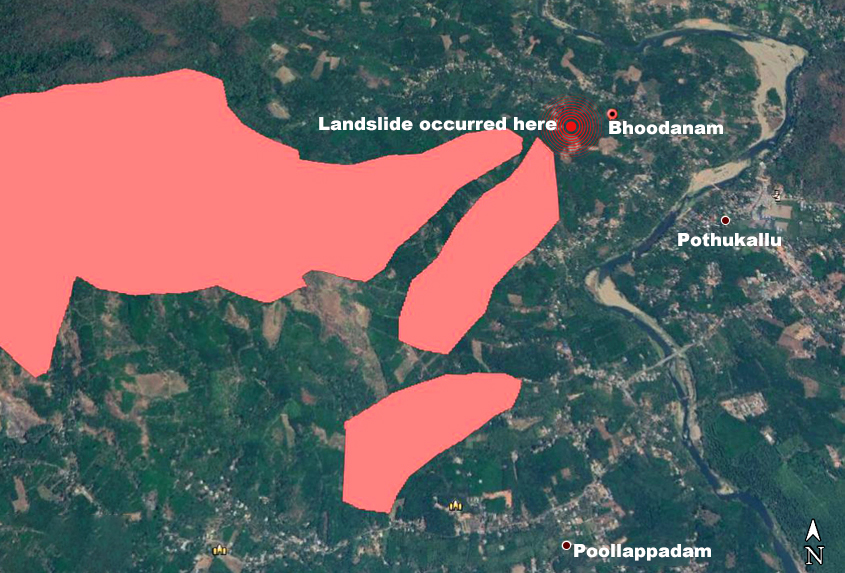 Even as rescue operations were under way on Saturday, another landslide occurred triggering panic. The main relief camp in the region is functioning at the Pothukallu near Kavalappara.

A map released by the disaster management authority explained that around 5,607.5 sqkm of area in Kerala was vulnerable to landslides, which is 14.4 per cent of the total area. This map was prepared on the basis of the study conducted by the National Geophysical Research Institute. About 1,848.3 sqkm of the total area is extremely vulnerable to landslides, while 3,759.2 sqkm faced moderate risk.

Regions in Idukki, and Palakkad districts were highly vulnerable. Nedumangad in Thiruvananthapuram, Meenachil and Kanjirappally in Kottayam, Thodupuzha and Udumbanchola in Idukki, Chittur and Mannarkkad in Palakkad, Nilambur and Eranad in Malappuram, Taliparamba in Kannur fell into the high-risk category. Apart from these, there are 25 taluks also on the list. 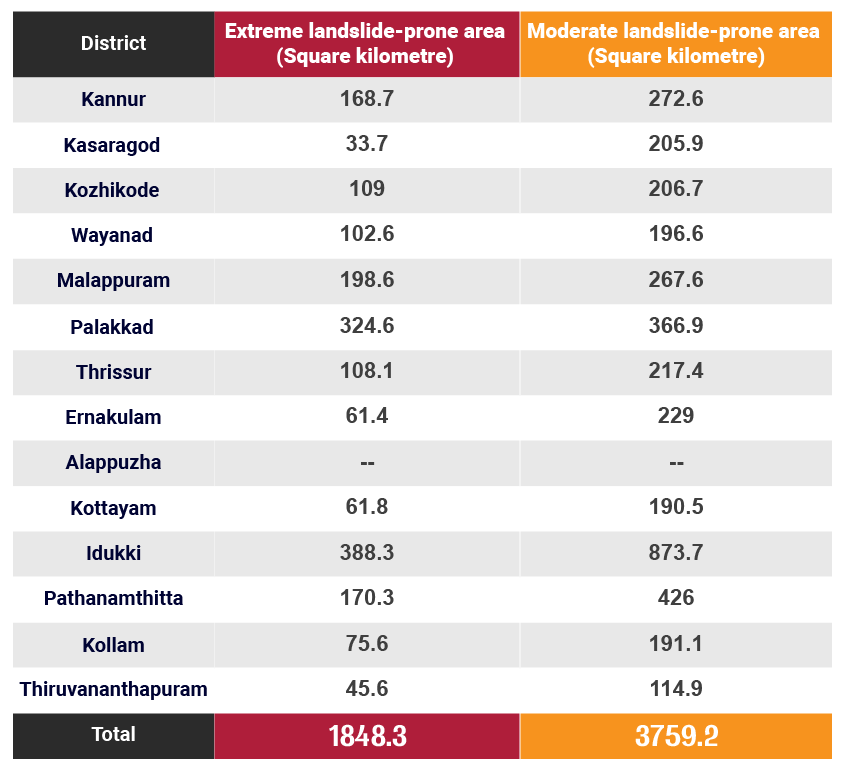 Prone to flooding too

A total area of 5,624.1 sqkm is at risk of flooding too spread out across the 14 districts. 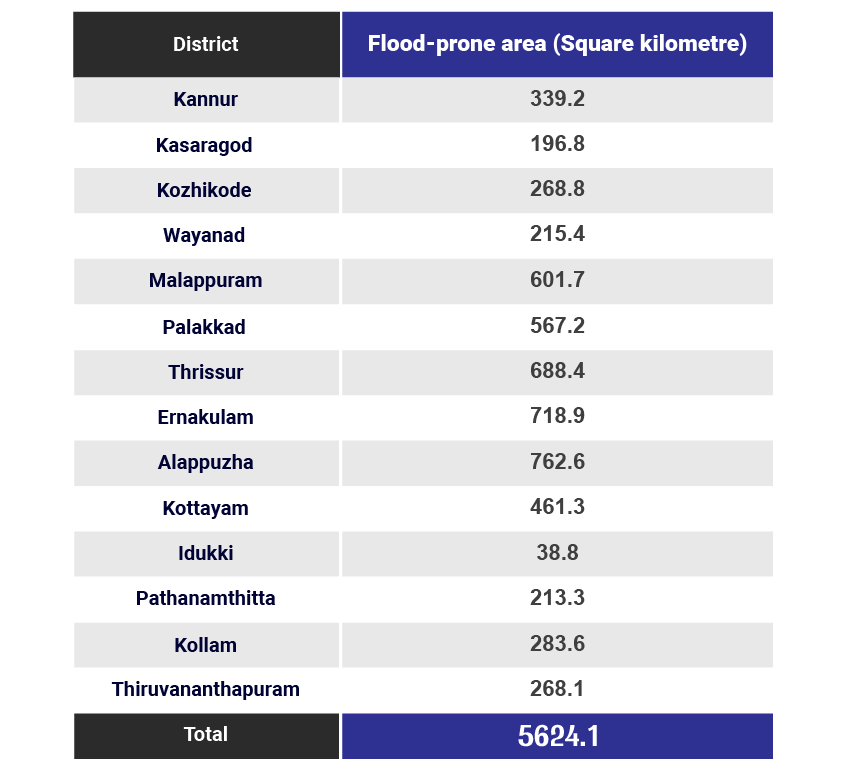 The GSI had released a report that said the landslide-prone regions in Kerala were increasing. The National Centre of Earth Science Studies had released a map on areas that were highly prone to landslides and those that were moderately prone. The district-wise maps of these areas are available on the website of the state disaster management authority. You can check out these areas on Google Earth Pro too. Click here to find the maps

A preliminary report on the study conducted on the 1,943 areas that were struck by landslides and mudslips during the August floods of 2018 had found that the landslide-prone areas in the state were increasing.

As the soil had not hardened post the last year's floods, the possibilities of such disasters were high this year. As many as 5,000 cases of landslides, including big and minor instances, mudslips and soil piping had occurred during the last year's floods. Landslides were reported from 80 regions in eight districts during two days this year, as per the government records.