Elections in Thrissur are dicey as voters have no favourites

Thrissur is renowned for the scintillating temple fest locally known as 'pooram'. A riveting electoral contest that matches the traditional 'poorams' is on in the Thrissur Lok Sabha constituency as Kerala is set to go to the polling booths later this month.

The poll history reveals the voters in this constituency in central Kerala have had no favourites and they don't mind upsetting the tallest leader who enters the fray here. Thrissur has voted to power laymen like CR Iyyunni and booted out intellectuals like Joseph Mundassery.

Even Congress stalwart K Karunakaran lost from here (1996) as the locals voted for CPI's V V Raghavan instead. Seeing his sad face the next day in newspapers, some locals noted 'We would not have voted for Raghavan if we knew 'Leader' (as Karunakaran is known) is so gentle'. But they meted out the same fate to his son K Muraleedharan in the next election, a mid-term poll, in 1998.

The candidates fielded by the Left has won 10 out of 16 Lok Sabha polls here; Congress won the rest.

It was in Trissur the CPM committee first met after Communist party split in 1964. Its leading lights EMS, Harkishan Singh Surjeet and V S Achuthanandan took part in the historic meet.

Thrissur has backed Congress leaders like P C Chacko and A C Jose too. Chacko won in 2009 for 25,151 votes, while CPI's Jayadevan won with a margin of 38,227 five years later - the fluctuating fortunes of parties reveal the results could swing any way. 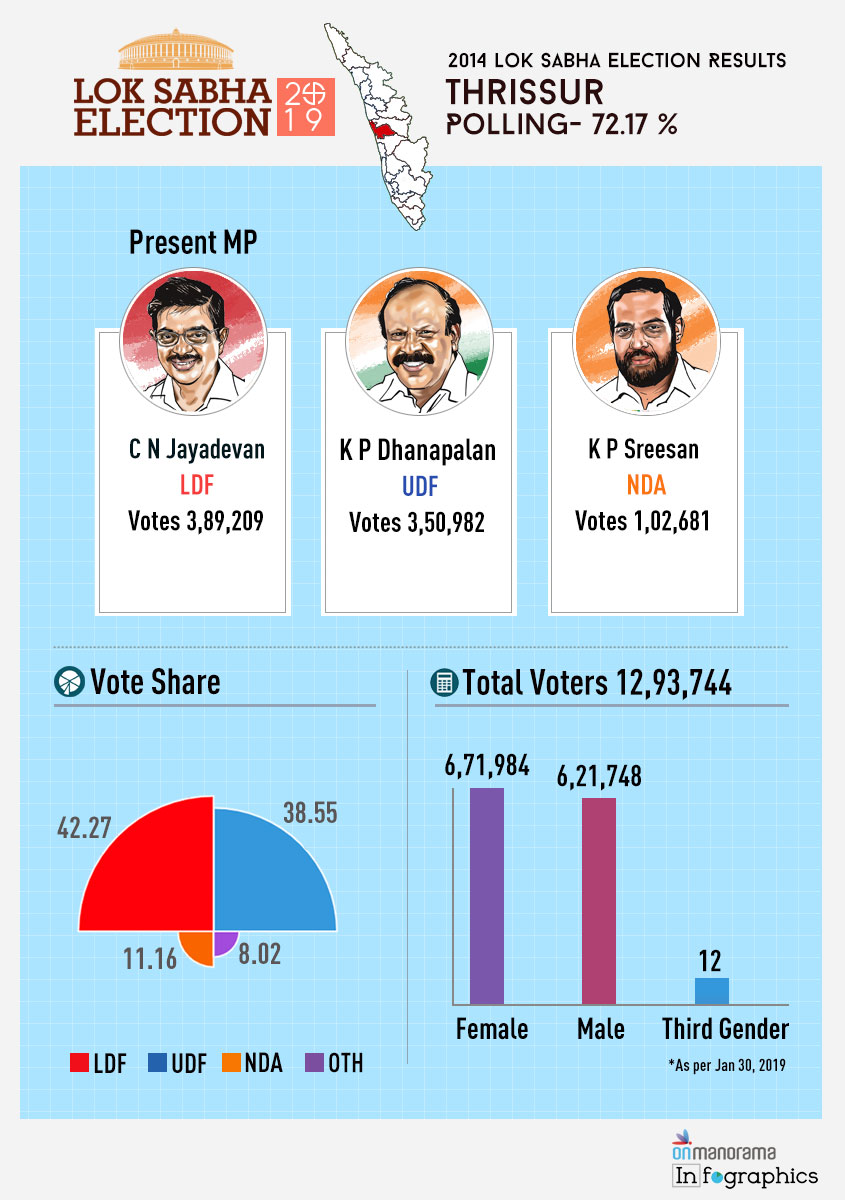 Rajaji Mathew Thomas, MLA, is the LDF candidate for the 2019 Lok Sabha election. He is the national leader of All-India Students' Federation (AISF) and was the vice-president of the World Federation of Democratic Youth from 1985-1996.

TN Prathapan, ex-MLA of the Congress, is the candidate of the United Democratic Front (UDF). The BJP-led National Democratic Alliance (NDA) has fielded Rajya Sabha MP and Malayalam film actor Suresh Gopi after transferring BDJS chief Thushar Vellappally to Wayanad, where Congress chief Rahul Gandhi has made a surprise entry as the Congress candidate.

Both Rajaji and Prathapan enjoy a clean image. Both have come up in ranks in their parties without the help of social media campaigns or online activism.

Thrissur was CPI's lone seat in the outgoing Lok Sabha. Naturally, the party accords the utmost attention to the candidacy of the sitting MP for another term.

Coming from the fishermen community, Prathapan has had to fight poverty as a child. Starting off as KSU leader in school, he rose up in ranks to become a panchayat member and an MLA with no godfather figures to support. Rahul Gandhi handpicked him for the Thrissur Lok Sabha seat. He currently leads the National Fishermen Congress.

Multifaceted Suresh Gopi is a larger than life figure on the screen, he has conveyed his philanthropist side on reality shows. Earlier he was nominated to the Rajya Sabha by the BJP.

Both political and nonpolitical issues will be discussed this time in the constituency. The takeover of Vadakkunnathan temple administration by the CPI trade union CITU (Centre of Indian Trade Unions) and the installation of a CPM local secretary as its head will definitely have a bearing on voters' choices.