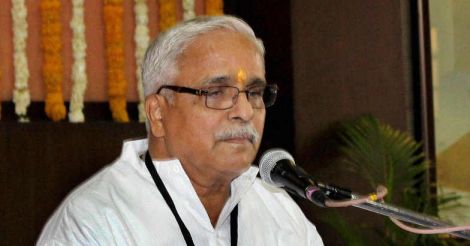 New Delhi: The RSS central leadership has made its stand clear about the entry of young women to the Sabarimala shrine, in a snub to the state units of the RSS and the BJP, which had positioned themselves as the defenders of a custom that barred women between 10 and 50 years atop the holy hill.

The RSS wants to allow all women up to the limits set for men at Sabarimala, RSS general secretary Bhaiyyaji Joshi said. Barring the entry of women did not make any sense, even if it was in the name of a thousand-year-old custom, he said in an interview telecast on RSS-affiliated Janam TV.

Joshi’s statements contradict the stands of RSS prant sangh chalak P. E. B. Menon and BJP state president Kummanam Rajasekharan, who have objected to young women’s entry into the Sabarimala shrine. The message from the RSS honcho would put the state leaders in a fix.

Menon had reiterated his position even last month, when he inaugurated the Tantra Vidya Peedham the RSS set up at Aluva.

The high court lifted the stay on the trial and directed the trial court to resume the proceedings from...