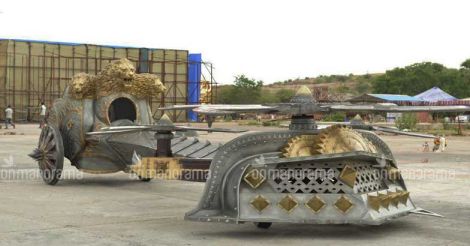 Clichéd as it may sound, the feeling of watching S. S. Rajmouli's visual spectacle, Baahubali - The Conclusion, has been beyond words, expressions and descriptions. As many opined, Indian cinema could be divided into phases in history: before and after Baahubali!

It's not just about the well-defined characters, intriguing narrative, overwhelming background score and the breathtaking action sequences, but the grand sets, towering palaces and statues with intricate carvings, and the elaborate weaponry and props have also added to the visual appeal of this epic war drama which has set the cash registers on fire.

Along with Prabhas, the franchise's lead actor, and director Rajamouli, national award-winning production designer Sabu Cyril had also invested five years of his life into Baahubali. Visibly, he is over the moon now as the film has crushed many existing records in the box office, taking Indian cinema to greater heights. 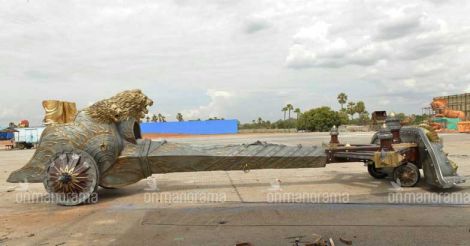 Much of the unprecedented success of the film could definitely be attributed to the director’s vision and creativity coupled with Sabu Cyril’s patience and hard work.

If the audience sat up and watched the epic war scenes in the movie without batting an eyelid, the rampaging chariot used by Bhallaladeva (Rana Daggubati’s character), is one of the key reasons. Regular moviegoers might have seen inventive and aesthetically-designed war machines in Hollywood movies, but the majestic combat vehicle with revolving blades in Baahubali 2, which annihilates whoever comes its way, has been a fresh and novel experience to the audience.

Extensive research and a lot of hard work had gone into the creation of the ferocious battlefield killing machine, that has drawn accolades from all sides upon the release of the movie, says Sabu Cyril says. 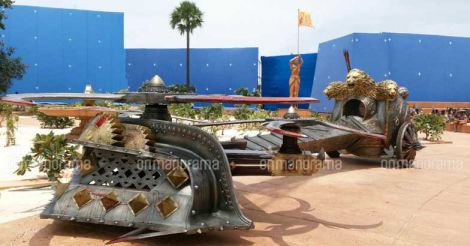 The scythed chariot is the most lethal weapon in Bhallaladeva’s armory. Rajamouli had narrated to me in detail the features of the machine which would be used by the film’s antagonist to storm into the rival citadel and cut enemies into pieces with the bladed weapon mounted on its center. I visualized those mental images and designed the chariot. The vehicle did not require a higher pickup, but it should be able to carry loads.

So, I thought engine of a bullet would be ideal to power the chariot. Before finalizing, we took a number of factors into consideration. The 500cc engine of the Royal Enfield has more pulling power than other vehicle engines. Moreover, it is comparatively cheaper.

We purchased a second-hand bullet for the purpose. The handles were replaced with a steering and two wheels each were attached to the front and rear sides. The steering parts were procured from a small Mahindra pick-up. The chariot had a driver, but as the arrows were launched from the front portion, the person driving the chariot will not be visible to the audience. It took about a month’s strenuous efforts to create the chariot. 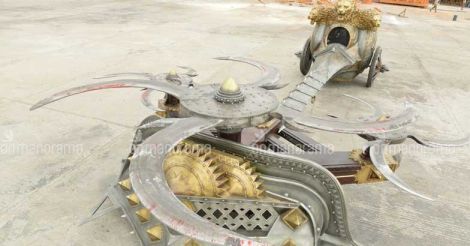 During the discussions of the first part - Bahubali: The Beginning – the director came up with the idea of a chariot that could be used by Bhallaladeva to kill enemies en masse. The vehicle that we created for the prequel had four blades on it, but the director wanted a really rough-looking weaponized chariot for the second part. So the number of the rotating blades were reduced to three. As the chariot got a bit bigger in part 2, we decided to use Bullet engine to power it.

No stranger to make-believe experiments 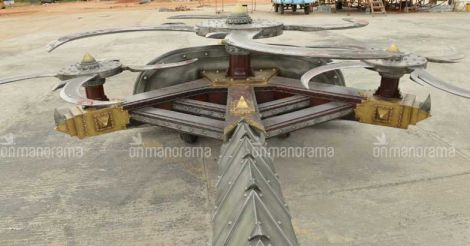 My father had a BSA motorcycle, which looked similar to a Bullet. The image of that bike is still vivid in my memory, so when the director asked me to design a chariot, the idea of powering it with a Bullet engine struck me instantly.