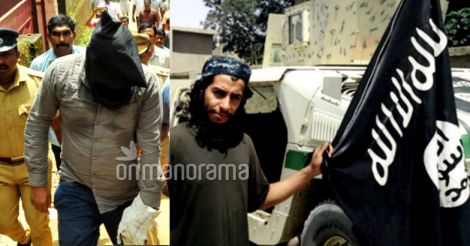 New Delhi: Subahani Haja Moideen, an Indian with Kerala roots who is alleged to be an Islamic State (ISIS) operative, knew the terrorists who carried out the attack inside a theater in Paris last November killing over 100 people but has feigned ignorance about the deadly plot, it has emerged from investigations.

Moideen was arrested from Tamil Nadu in a crackdown by the National Investigation Agency (NIA) with the help of central security agencies and other state police, foiling designs of ISIS operatives to target a few judges of Kerala and foreign tourists visiting the coastal state.

The accused, picked up from Tirunelveli in Tamil Nadu, was radicalized and recruited in ISIS through social media platforms and he had left India for Istanbul from Chennai April last year on the pretext of performing 'Umrah', official sources said.

After reaching Istanbul, he crossed over along with other people who hailed from Pakistan and Afghanistan to Iraqi territory under control of ISIS.

That is the period during which Moideen claimed that he had met Paris bombers including Abdelhamid Abaaoud and Salah Abdeslam, the sources said.

While Abaaoud was killed in retaliatory fire during the Paris theater attack in November last year, Abdelslam is in the custody of French police.

Moideen had returned to India in November and he said he came to know about the Paris attack through news and remembered his meetings with the accused in ISIS controlled Iraq and Syria, the sources said.

The NIA has informed the French security officials and contacted its Embassy here, the sources said, adding this was done hoping that it would lend any help in their investigation.

They said that French officials could question him as well after getting the requisite court order.

According to the multi-country investigation into the French terror strikes, the accused involved in the gruesome killings were in ISIS-controlled areas at the same time when Moideen was there.

31-year-old Moideen was in Iraq from April 8, 2015 from where he was taken to Mosul and underwent detailed 'religious training' followed by combat training which included a course in automated weapons. After this, he was deputed to fight war for almost two weeks.

During the war, he told interrogators that he was paid USD 100 per month as an allowance by ISIS besides accommodation and food.

However, he told interrogators that he could not withstand the violence and war misery in Mosul and decided to leave especially after he saw two of his friends getting charred.

He was jailed by ISIS and produced before an Islamic judge who sent him to Syria. He claimed that he was allowed to cross over to Turkey from where he contacted his family with the help of the Indian consulate at Istanbul.

He arrived in Mumbai after a gap of six months in September last year on an emergency certificate and returned to his ancestral place where he was staying with his wife. He later managed to get a job at a jewelry shop at Kadayanallur, Tirunelveli in Tamil Nadu.

'Rebel' Kochi: 20 rebels in the fray in Kochi corporation elections

In the last elections, four rebels won in Kochi Corporation.