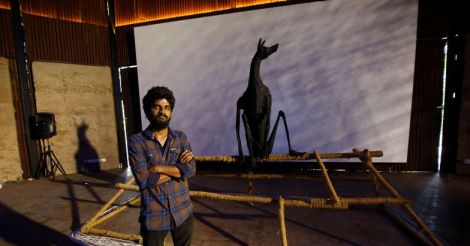 B. Ramabhadran, a student of K.R. Narayanan National Institute of Visual Science and Arts in Kottayam, with his installation based on Thakazhi Sivashankara Pillai in his short story Vellapokkathil. Credit: KBF

Kochi: The pain and hopelessness of isolation as conveyed by celebrated writer Thakazhi Sivashankara Pillai in his short story Vellapokkathil (In the Flood) has taken an artistic form at the ongoing third edition of the Kochi-Muziris Biennale.

Channeling Thakazhi’s rich literary imagery into an arresting ‘short story installation’ that examines questions of caste identity, B. Ramabhadran, a student of K.R. Narayanan National Institute of Visual Science and Arts in Kottayam, has produced a sculpture of a dog’s wait for its master during a flood and its eventual death.

Acclaimed filmmaker Jayaraj presented the installation at an inaugural function Saturday in the Pavilion in Cabral Yard, where the work has been housed as part of ‘Undiplomatic Tales’ – the ongoing ‘Artist’s Cinema’ package curated by Marathi filmmaker Umesh Kulkarni. 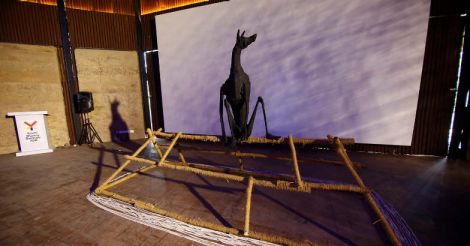 The installation features the sculpture of a black dog sitting on a rooftop and incorporates looped sound recordings of a dog's howl amid human groaning and sobbing set against the lashing of rain and gurgling of floodwater. Credit: KBF

Lauding Ramabhadran’s work, Jayaraj – who directed a short film based on the widely-read story – said it was a challenging experience to recreate the masterwork in another format.

“As a creative work, “Vellapokkathil” is vast both in content and depth. The way Thakazhi depicts nature and the universal pain of separation and sketches the relationship between the dalit character Chennan and his dog are elements that demand to be conceptualized into another medium,” observed Jayaraj, who remembered having to build a set on a lake to create the flood effect for his 2008 movie.

The installation, which takes its title from the book, features the sculpture of a black dog sited on a rooftop and incorporates looped sound recordings of a dog’s howls and yelps alongside – Thakazhi notes them as being sometimes akin to – human groaning and sobbing, all set against the lashing of rain and gurgling of floodwater.

“Thakazhi, one of the most celebrated writers from Kerala whose works have been translated into many languages, was someone who perfectly captured nature through his words,” said the Ottaal director, who also recounted some fond memories of the litterateur. 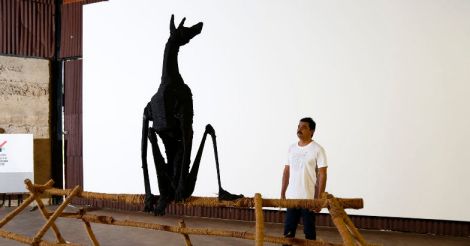 Acclaimed filmmaker Jayaraj – who has directed a short film based on the widely-read story – said it was a challenging experience to recreate Thakazhi's masterwork in another format.

According to Ramabhadran, this was the first time a Malayalam short story had been adapted into sound and sculpture. “It was Chennan’s dire situation that forced him to leave the dog, though he was pained to do so. I have tried to reflect on whether his desperate condition – and those of dalits like him – has really changed much even now, so many years after the story was written. This was the burning question that prompted me to recreate Vellapokkathil,” said Ramabhadran, who has directed documentaries and short films.

The installation, which was exhibited at the Pavilion till Sunday shared the stage with screenings of short films by students from film institutes around the country.