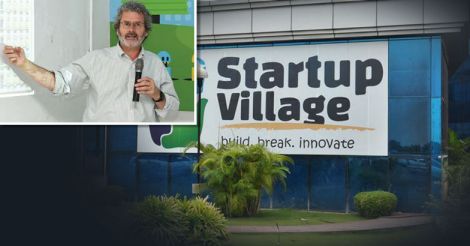 Kochi: The new knowledge-based industrial age will be a big opportunity for Kerala, which shunned big industries and the job opportunities that they create to depend on Gulf money, says Neil Gershenfeld, an MIT professor and an architect of fab lab. In the second industrial revolution, in which anyone can make anything through the lab, Kerala can take a leading position in the beginning itself.

Neil, the director of the Center for Bits and Atoms at Massachusetts Institute of Technology (MIT) in Boston, which developed the fab lab, had come to Kochi Startup Village to converse with techies and to explain the operation of the lab.

He said huge industrial plants, which came up as part of the industrial revolution, were the dinosaurs of the future. However, some big industries might remain, just like how mainframe computers survived despite the arrival of desktop computers and smartphones.

Neil has been conducting a course — How to make (almost) anything — at MIT for the past 10 years. The lab can design any industrial product and make its prototype. The machines and other equipment needed for it have been brought to the lab from different countries. The lab has modern equipment such as a laser cutter, a 3D scanner, a 3D printer, a circuit-board printer, a vinyl cutter and a shopbot.

These machines can be used to make even similar machines, and any prototype can be created if you have imagination, intelligence and technical knowhow. Those who join Neil’s course have to create a new product every week. In future, such products might have to be made as part of engineering course projects.

Neil is triggering an industrial revolution that is moving industries from big plants to labs and small units. Fab labs have been set up all over the world. China, which was reluctant, is establishing them now. Video conferencing facilities connecting all of them will be arranged. Neil pointed out that no one could monopolise products from such labs.

Fab lab is not for startup industrialists only; all types of students and entrepreneurs in the knowledge age can use it. Fab labs will become a universal feature of colleges and schools. And the first step is to train people to use fab labs.