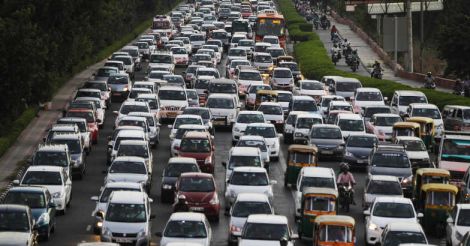 Kochi: A technical solution to end the problem of ambulances being stuck in traffic junctions has been found by two entrepreneurs here.

The novel solution by the startup venture of Mohamed Jasim and Muhammed Sadique, Traffitizer Technologies Pvt Ltd, which is incubated at the Center for Social Innovation and Incubation at Rajagiri School of Engineering and Technology (RSET), will soon be set up at the junctions.

Their Traffitizer- Emergency Response System (T-ERS) is a Centralized Internet of Things (IoT) based system, with artificial intelligence at different levels.

This has a hardware-software module that can be connected to the traffic control system at any traffic junction.

"All that an ambulance driver has got to do before starting an emergency trip is to turn on the T-ERS configured in their ambulance unit. Traffic junctions will automatically initiate a green channel path when the ambulance enters a predefined zone near the traffic junction area," RSET principal Dr A Unnikrishnan told PTI.

He said the criticality of the patient can also be set by the ambulance driver in the T-ERS application, which makes the system capable of handling situations with multiple ambulances reaching a junction simultaneously intelligently.

The length of the green channel zone at the junctions can also be set to dynamic mode that can be defined by traffic police depending on traffic flow during peak and non-peak hours.

The T-ERS system that works on an internet based platform can also be remotely controlled from traffic control rooms.

"This project has a direct impact on humanity... this will solve one of the major issues faced in ambulance vehicle patient transportation system in different developing countries" said Fr Jose Alex CMI, director- RSET.

The institute claimed that the system was later assessed, tested and evaluated by Kochi City Traffic Police under the guidance and support of the commissioner, M.P. Dinesh and DCP Yathish Chandra.

The system was commissioned at Kakkanad junction on April 17, 2017 and is now gearing up to scale to other junctions.

"The T-ERS was fixed in ambulances operating out of Kakkanad and has already helped more than 20 emergency patient shifting. Thrikkakara Muncipal Cooperative hospital has most number of use cases of T-ERS," said Mohamed Jasim, co-founder and managing director of Traffitizer Technologies Pvt. Ltd.

"Our next milestone is to cover all main junctions in Kochi city", said Muhammed Sadique, co-founder and director of Traffitizer Technologies Pvt Ltd.

"I strongly recommend this system as it has proven to be highly effective. The system with limited hardware components can be easily extended to other traffic junctions at a lower cost. Hope this will be a good infrastructure for the cities", Yatish Chandra, Dy commissioner of police, law and order, Traffic, Kochi city said.

Team Traffitizer has already got many recognition to their credit.

They said the company is one among the 1117 start-ups recognised by the Department of Industrial Policy and Promotion, Ministry of Commerce and Industry.