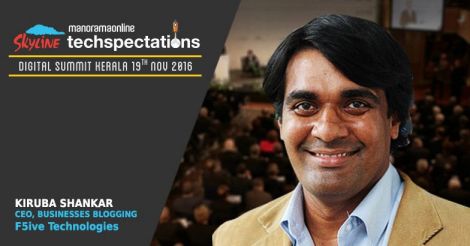 “And, when you want something, all the universe conspires in helping you to achieve it.” -Paulo Coelho, The Alchemist

These inspiring words changed the life of many people including Kiruba Shankar's. Shankar found that he could change not only his life, but also the lives of others.

Many people wish they had a second chance to modify life; to do things that they had done in their lives differently. However, many do not get a second chance to revamp their lives. Kiruba Shankar tries to help others do exactly that through his firm, Business Blogging, which is a social media consultancy. He is also the founder of F5 technologies. Through these companies, Shankar encourages others to be an entrepreneur like him.

Business Blogging tries to maximize the opportunities presented by social media while F5 is focused on web development technologies. Kiruba Shankar has been able to develop both firms that are now operating successfully.

Shankar was with Sulekha.com for 13 years and the experience gained from there helped him to start a venture of his own. He is an active blogger and has also written many books. In addition to the two firms, he is also the co-founder of Proto.in, believed to be one of India's biggest startup. He is also a teacher at Asian College of Journalism and a columnist with leading dailies.

Shankar also conducts workshops for people who want to succeed in life. During the workshops, he asks attendees to withdraw from the digital world as well as the print media and focus only on what they want to be in life. He has three questions for entrepreneurs: What should you do to achieve your goals? What sources do you have to make your endeavors a success? What are your challenges?

Kiruba Shankar is to take part in Manorama Online's Techspectations digital summit 2016 in Kochi on November 19. It would feature a hackathon arranged by a media firm for the first time. Skyline is the main sponsor. Log on to htpps://www.techspectations.com for more details.