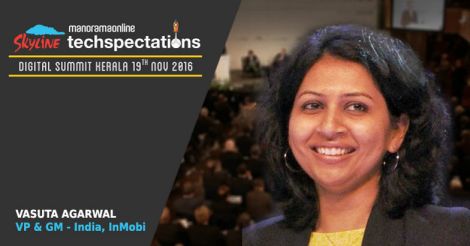 Vasuta Agarwal, vice-president and GM (India) of InMobi, one of the world’s largest players in mobile advertising, has confirmed her attendance to techspectations, a digital summit organized to mark the 20th anniversary of manoramaonline. The event is scheduled to be held in Kochi on November 19.

Tech world is widely viewed as a male bastion, but Vasuta is someone who could successfully challenge that notion and make a mark at InMobi within a short span of time.

She joined InMobi as a member of the team which was directly under the supervision of the company’s founding members, who have the primary power of decision-making at the mobile advertising major.

After being part of that squad for about nine months, Vasuta was shifted to the Product Group where she was assigned with the task of learning trends in online customers' requirements. In the next six years, she made it to the top echelons of InMobi and eventually became the vice-president.

The past two years with InMobi have been the most eventful and fruitful period in her life, Vasuta says, adding that she is driven by her passion for business which helped her achieve greater heights in career.

‘Enjoy the job that you do, success will definitely follow’, is her motto. As a student, she excelled in academics and extra-curricular activities equally despite going through a lonely childhood. Vasuta was the only child of her parents.

Soon after completing her MBA, she landed her first job at McKinsey & Company, a global management consulting firm. “It was a great experience. I could explore a diversified world of business and gain professional knowledge and skills while being part of a hard working team. But, the hectic schedule forced me to quit the job as I had to travel frequently at least five days a week,” Vasuta says.

Daughter of a professor couple of the University of Lucknow, Vasuta’s entire education has been in India. She did her graduation in electronic engineering from the Birla Institute of Technology & Science (BITS), Pilani, and completed MBA from the Indian Institute of Management. The college days also brought her hidden talent in dancing and acting to the fore.

As she never had to fight hard to survive in male-dominated workplaces, the higher number of men at workplace does not bother her at all. “If you have fewer female colleagues, don’t worry. Actually, it gives you a better opportunity to showcase your talent,” she says with an air of confidence.

What helped her carve a niche for herself in the industry was her ability to foresee the challenges ahead of a growing empire and face it with confidence and conviction.

She offers a piece of advice to women who dream to be successful leaders and entrepreneurs. “First and foremost, you need to thoroughly understand yourself. It is your skills, dreams, failures, wishes, and fears that ignite the spark within. This kind of self-assessment is the first step towards change. You should be proud of your achievements, but at the same time, you should develop an ability to see things simply and realistically.

The event, which is divided into five categories – digital, social, video, mobile and startups - will begin at Ernakulam Crown Plaza Hotel at 9.30 a.m.

Various sessions of the event will discuss threadbare the latest developments in digital technology as well as its influence on the traditional media.

In connection with the program, a media hackathon competition will be conducted at Hotel Avenue Center in Panampilly Nagar. The first three winners will be awarded a cash prize of Rs 2 lakh, Rs 1.5 lakh and Rs 1 lakh respectively. They will also be given an opportunity to make a presentation on a subject of their choice at techspectations.

The official partners of the event are AWS Activate, Mobile 10, and YouTube, while technical support will be provided by HiFX IT & Media Services. Skyline Builders are the main sponsors.