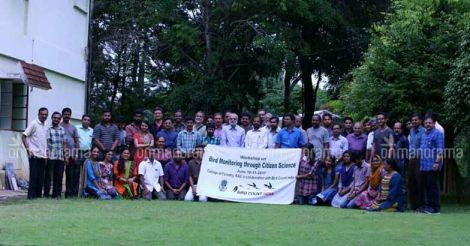 The concluding discussion session of the first stage of bird atlas was held at College of Forestry, Thrissur on June 11, Sunday. Photo: Manoj Karingamadathil

Kerala's avifauna is no more a subject of speculation, thanks to the passionate bird watchers and voluntary ornithologists’ groups, who successfully mapped 10 percent of the state's bird population as part of the nation's ever first 'bird atlas project.’

An arduous initiative by the College of Forestry, Thrissur, the first phase of the project involved several stages of dry season and wet season surveys in selected areas of each district. This itself generated some exceptional results, including some relevant observations regarding the population and migration patterns of birds over years, their contributing factors and larger impacts on the environment. 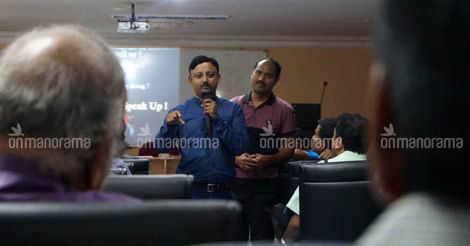 The discussion aimed at sorting out the technical and logistical issues in transporting, getting into forest cells and accessing the habitats. Photo: Manoj Karingamadathil

The concluding discussion session of the first stage of bird atlas was held at College of Forestry, Thrissur on June 11, Sunday. Participating in the discussion, Suhail, a representative of National Bird Count India, said that Kerala is setting forth an inspiring model in bird-watching, which is still a distant dream for many other states. “This is the first time we get a strategy to map the birds across rural, urban, agriculture and forest habitats. Impact of such a mapping project is beyond imaginations. As we get a snapshot of the bird life in a certain area, we get to know the impact of organizations, settlements, policies and the environmental changes at large,” he said.

Interesting observations regarding the increased migration of dry land birds into Kerala, which is an alarming indicator of climate change, were also made by the survey. “It is amusing that even the most challenging parts of the terrain is being surveyed free of cost on a voluntary basis. Bird watchers and photographers are two unorganized sections in most other parts of the country. A centralized effort is first of its kind,” Suhail added.

Migration to the online spaces has also benefited the realm of bird watching in India. From a time when isolated people manually collecting data regarding bird population from areas of subjective interests mostly overlapping, the activity has grown to a project where organized groups of people select unexplored areas and enter data to a single, centralized digital platform. 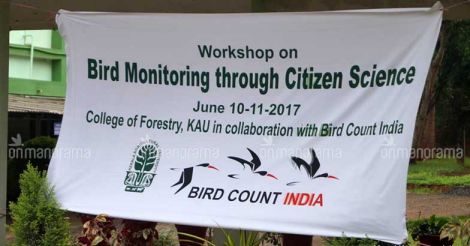 The concluding discussion session of the first stage of bird atlas was held at College of Forestry, Thrissur on June 11, Sunday. Photo: Manoj Karingamadathil

“Digitization has done magic to this field,” says Praveen J, chief co-ordinator of the state level bird atlas project. “Earlier, birders used to select areas of active bird population. Here, we divided the entire state into different cells and selected 10 out of 100 cells to carry out the survey. The geographical data, including trek-tracks and directions have been formulated too. This discussion aimed at sorting out the technical and logistical issues in transporting, getting into forest cells and accessing the habitats. With the conclusion of first stage, the team knows better about all these and it will make the forthcoming stages more efficient,” Praveen told Onmanorama.

Peafowls, which is actually a dry-land bird species, have become common in Kerala. Common green bea-eater, which was a rarity at Kannur, have started making dry-season visits. Forest birds like red whiskered bulbul and black footed bulbul have now become common in Kannur district.

Differences were noticed in the distribution pattern of jungle babblers and yellow babblers. Kerala, a state with rich population of avifauna, was always active in bird watching though the efforts were independent and decentralized. A venture to centralize the birding activities of the entire state, the bird atlas project is almost manufacturing an encyclopedic volume of data on the bird count, movement and their patterns. 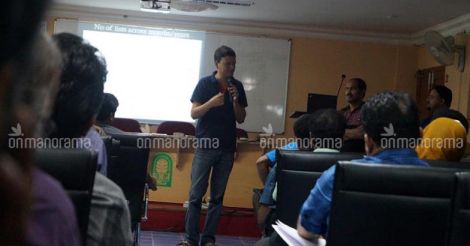 The forum has formulated an action plan for the next three years by sorting out the issues faced in the first stage. Photo: Manoj Karingamadathil

“Otherwise a million dollar project, bird atlas team has faced several hurdles in carrying out the strategy,” says Prof P.O. Nameer, head of the department, college of forestry. “We require permission to get into the prohibited areas of forest. Though we get to reach there, it is hard to trace a way out or find a safe place to halt. Available GPS services have their own limitations in the forest areas,” he adds.

The forum has also formulated an action plan for the next three years by sorting out the issues faced in the first stage. Pioneers are planning to introduce birding workshops to help beginners in identifying species from calls, pluming patterns etc. Ideas such as themed birding drives, concentrating on time-specific species like 'warbler weeks' or 'pipet month' were also raised in the forum. Such projects would help identify the specific behavioral changes of a species in relation with habitats, weather and seasons. Monthly bird challenges to find a winner, who has identified the maximum number of birds in a specific species, will also add to the data of bird population and movements.