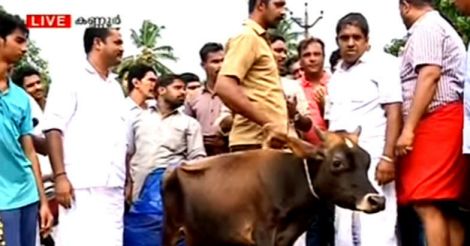 A group of Youth Congress workers slaughtered an ox in public and distributed the cooked meat in Kannur on Saturday.

Kannur: The Kerala police Sunday booked some Youth Congress activists, who allegedly publicly butchered a calf to protest the Center's ban on the sale of cattle for slaughtering.

The brazen act was committed in front of a huge crowd in Kannur Saturday during the 'Beef Fest' held by the Left and Congress parties in Kerala to protest against the Center's ban.

An embarrassed Congress sought to distance itself, saying the party will not support anyone who has violated the law, but a Youth Congress activist who led the protest said he had no regrets.

Congress leader M. Liju said that even while protesting, one needs to maintain a certain level of decency. "The incident probably shows the immaturity of the youth," he added.

The former Youth Congress president said there were certain rules with regard to slaughtering of animals which they should have kept in mind. They might have carried it out considering the serious consequence of the government notification, he, however, added.

'Cruelty at its peak'

Kerala BJP president Kummanam Rajasekharan, who posted the video of the the gory incident on Twitter, called it "cruelty at its peak" and said no normal person can behave in this manner.

CPM's M.B. Rajesh, MP, said the illogical form of protest should have been avoided and it would only help the Sangh Parivar.

On the basis of a complaint from Yuva Morcha district general secretary C.C. Ratheesh, police Sunday registered a case against Youth Congress worker Rijil Makutty and others under Section 120 A of the Kerala Police Act, police sources said.

The offense deals with slaughtering any animal in a way that causes annoyance or inconvenience to the public and is punishable with imprisonment up to one year or a fine of up to five thousand rupees or with both.

"If anyone has violated the law then he should be dealt with accordingly and the Congress party will not support him. However, we need to first establish whether the person in the video is related to the party or not," said Congress spokesperson Abhishek Manu Singhvi at a press briefing in Delhi.

However, Rijil Makulti told a television channel, "We don't regret our act. This was done as part of our protest."

The 18-month-old animal was butchered in an open vehicle as Youth Congress workers raised slogans against the Center's decision to ban sale of cattle for slaughter. The meat was then distributed free to onlookers.

Congress leader Pandalam Sudhakaran said the manner in which the calf was dragged for being slaughtered left a pain in the heart. It is difficult to accept such mode of protests, he said.

"What happened in Kerala (Saturday) is thoughtless, barbaric & completely unacceptable to me & the Congress Party. I strongly condemn the incident,” he said in a tweet.

Condemning the incident, Kummanam said DYFI and Youth Congress, youth outfits of the CPM and Congress, were turning 'butchers' and people should be careful.

In the name of protests against the cattle sale ban, animals are being slaughtered and protests staged with blood stained head of the butchered animal. "Is it something a normal person does?” Kummanam asked in a press release here.

The Center has banned the sale and purchase of cattle from animal markets for slaughter, a move that is expected to hit export and trade of meat and leather.