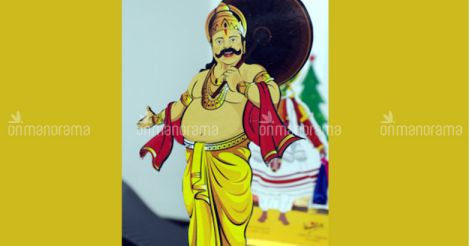 A huge cutout of Mahabali, which was erected in front of a park at Mavelipuram in Kochi, was found missing

Kakkanad: Even the most righteous king Mahabali could not 'save' himself from the clutches of a group of thieves in the modern day Kerala.

A huge cutout of Mahabali, which was erected in front of a park at Mavelipuram, was found missing Friday. The involvement of more than one person is suspected as the cutout was at least eight-feet long.

The cutout Mahabali was built under the supervision of Thrikkakara Cultural Center a year ago.

Last month, it was erected in front of a park using strong steel bars which would make it extremely difficult for someone to untie it. As the park is situated near the busy Seaport- Airport road, the officials suspect that the cut out might have been transported with the help of a vehicle.

It was found missing when the officials came in the morning to open the park. Paul Meecheril, president of the Cultural Center, has filed a complaint with the police.