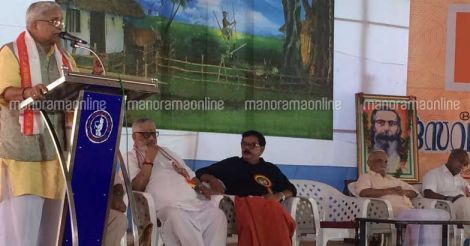 Guruvayur: Rashtriya Swayamsevak Sangh (RSS) was the answer to those who thought that India's culture of embracing all religions was the country's weakness, National award winning filmmaker Priyadarshan said here on Saturday.

"We wholeheartedly accepted all religions that came to our country. But then those who came here thought that it was our weakness. RSS is the reply given by the Indians to those who had such doubts," he said while addressing a state meet of the Seva Bharathi, an RSS-affiliated organization.

He said he was attracted to the Seva Bharathi as the outfit provides food to 38,000 people everyday.

Priyadarshan, who is the convener of the meet, came to the event wearing a saffron dhoti.

Priyan had chaired the jury that picked the last national film awards.

This is not the first time that Mollywood personalities are backing the Saffron outfits.

Actor Suresh Gopi had extensively campaigned for the BJP in the 2014 Lok Sabha polls and the 2016 Assembly polls. He is now a BJP Rajya Sabha member.

Director Major Ravi is also a votary of Hindutva politics.