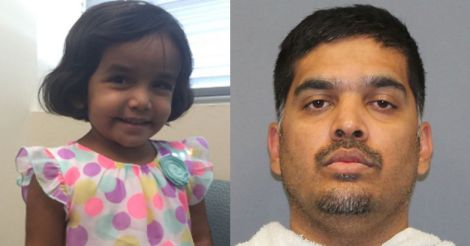 Wesley Mathews was arrested but released soon after on a Rs 2 crore bond. The girl has been missing since Saturday: File photo

Houston: In a sordid twist, the spine-chilling mystery of the missing 3-year-old Kerala girl in Dallas has taken a new turn with the investigators claiming a key lead in the case.

After examining CCTV footages, the investigating agencies have discovered that one of the three cars at the Mathews' residence, seized by the FBI on Thursday, had gone out of the premises at night.

Reportedly, this one-hour-long outing was made at the same time when the 3-year-old Sherin was allegedly 'missing'.

The case involving a 37-year-old man from Kerala in Dallas had garnered prime time interest after an unconvincing account of disappearance and criminal laxity was reported. Following the development, the police have requested more CCTV footages from neighbors and nearby shops.

The FBI had earlier searched the home of the 3-year-old girl, missing since Saturday for into her disappearance. The investigating agency had also seized three cars from the premises, two of which have been returned.

Sherin Mathews, who has developmental issues and limited verbal communication skills, had gone missing on Saturday after her foster father reportedly sent her outside around 3 am as punishment for not drinking milk. She was last seen outside her family's backyard in Richardson, Dallas, at 3.15 am.

Sherin was adopted from an orphanage in Kerala two years ago.

Richardson police along with an FBI evidence recovery team entered the house of Wesley Mathews, from Kochi, on Tuesday night to execute a search warrant, police Sergeant Kevin Perlich said.

The search was part of the "natural progression" of the investigation, he was quoted as saying by the Dallas Morning News.

Police went door-to-door in the neighborhood and used search dogs and helicopters to look for Sherin.

Sherin's foster father Mathews reportedly told the police that he put her outside and asked her to stand next to a large tree about 3 am on Saturday after she refused to drink milk, an arrest-warrant affidavit said. The tree was behind a fence, about 100 feet south of the family's home, and across an alley.

Mathews admitted to police that he knew coyotes had been seen in the alley, the affidavit said adding that he checked on Sherin about 3.15 am and realized she was gone.

After looking around for her, he said he then went inside 'to do laundry' and decided 'to wait until morning to continue searching or for her to return on her own', Perlich said.

Police were not alerted to her disappearance until about five hours later. "Why was the last sighting at 3 o'clock and the parents not call us until after 8 am, that's the question we want answered as well," Perlich told KXAS-TV NBC5.

The girl's mother does not face any charges. She was in the house at the time, but was reportedly asleep and unaware of what Wesley Mathews was doing, Perlich said.

Sherin's parents are no longer speaking with police and have since retained legal counsel, he said.

Investigators will process what they have collected, including security footage, electronics and items in the family's three vehicles that were towed from the home, Perlich said.

Mathews was arrested on Saturday on the charge of abandoning or endangering a child. He was released from custody on Sunday after posting $2,50,000 bond.

He is required to wear an electronic monitoring device and surrender his passport as part of the conditions of his bond, the paper said.

Meanwhile, officials with Texas child protective services removed the toddler's 4-year-old sister from the family on Monday and placed her in protective custody as police continue to search for the missing child.

The CPS would only say they have had "contact" with the Mathews family before, but "details are confidential," NBC Dallas reported.

The Mathews' reportedly adopted the girl two years ago from an orphanage in India. She was malnourished and physically underdeveloped and does not have the same language skills a typical 3-year-old would in the US, Perlich said.

He told NBC5 it was not unusual for her to be awake late at night to eat to increase her weight.

He was talking on Samantha Akkineni’s new chat show, Sam Jam and Rana broke down as he addressed his past illness.