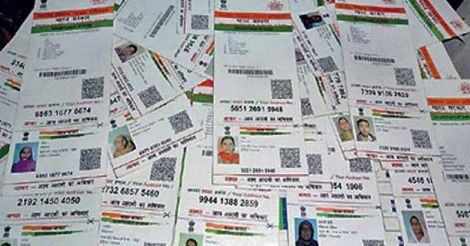 New Delhi: The Supreme Court Friday put a partial stay on the implementation of the provisions in the Income Tax (I-T) Act making Aadhaar number mandatory for allotment of PAN card and filing of income tax returns (ITR).

The court also said that those who already possess Aadhaar number will have to link it with PAN, but it cannot be insisted upon in case of people not possessing Aadhaar card.

The Income Tax Department had on May 31 urged taxpayers to link their Aadhaar with their Permanent Account Number (PAN), using an SMS-based facility.

The department issued advertisements in leading national dailies and described how both the unique identity numbers of an individual can be linked by sending an SMS to either 567678 or 56161.

» SMS facility is for those people with identical names on Aadhaar and PAN cards.

» You need to punch in your PAN number, Aadhaar number and the exact name as given in the Aadhaar card.

» After verification from the UIDAI (Unique Identification Authority of India), the linking will be confirmed.

» In case of any minor mismatch in Aadhaar name provided, Aadhaar OTP (one time password) will be required

» The OTP will be sent on the registered mobile number in the Aadhaar database.

'A world of income tax facilities'

The department said linking the two numbers is the key to "seamlessly avail online, a world of income tax facilities."

The government, under the Finance Act 2017, has made it mandatory for taxpayers to quote Aadhaar or enrolment ID of Aadhaar application form for filing of IT returns.

Also, Aadhaar has been made mandatory for applying for PAN with effect from July 1, 2017.

While Aadhaar is issued by the UIDAI to a resident of India, PAN is a 10-digit alphanumeric number issued in the form of a laminated card by the I-T department to any person, firm or entity.