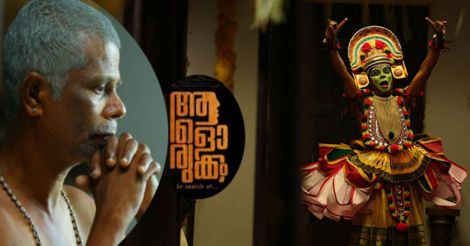 "To prepare for the role, I got trained a bit in the performing art of Ottanthullal by professional Ottanthullal artists," Indrans says.

Veteran actor Indrans bagged this year’s Kerala state award for the best actor, and the news comes as no surprise to those who know his incredible talent as an artist.

Sharing his happiness, Indrans said that he was extremely grateful to the director and the screen writer of the movie Aalorukkam.

“Aalorukkam is a touching movie. I was able to perform well because everyone supported me. To prepare for the role, I got trained a bit in the performing art Ottanthullal by professional Ottanthullal artists. But I think I was not very good in Ottanthullal. You need to have the physical flexibility to perform the art form, which I lacked.

Indrans plays Pappuvasan, an Ottanthullal artist, who talks about the everlasting beauty of love. The award winning actor has portrayed this unique character with much finesse and maturity.

Alorukkam is directed by VC Abhilash who is also a journalist. The critically acclaimed movie is bankrolled by Jolly Lonappan under the banner of Jollywood movies.

Thiruvananthapuram: Ace film maker TV Chandran who headed the jury of this year’s Kerala state film awards said that it was with great happiness that the jury selected veteran actor Indrans as the best actor.

He added that no other actor, in the recent times, had delivered such incredible performance in any movie as Indrans did in Aalorukkam.

“He was amazing as the father who yearns for his missing son. The jury members were amazed to realize the excellent actor in Indrans. He had been in the movies for such a long time and had even done some good roles. But he never got any honors or awards so far which he rightly deserved,” TV Chandran said.

“I would say that Indrans had literally taken away this award with his wonderful performance,” said the film maker.