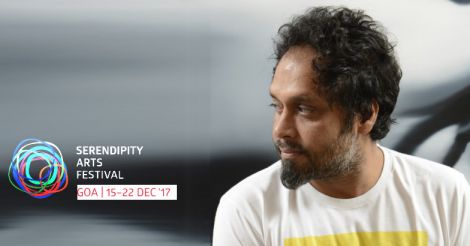 Komu acknowledged that the turbulent political scenario of South Asia has left a mark on the state of art and its politics.

Revolutionaries are not the only byproduct of the instability created by internal conflicts and political disorders, it also serves as a breeding ground for artists, who deftly transforms it into the magic ingredient of their masterpieces.

Noted Indian artist and sculptor Riyas Komu, who is on a mission to remediate the scattered political boundaries across South Asia through his Young Subcontinent Project, believes in making these issues central to the art process, rather than keeping them at bay.

The artist, whose works exemplify his philosophy, believes that "internal conflicts and political events offer a chance to reflect upon our own presumptions and values through which we relate to the world at large. Good art is always true to its political times."

Komu, however, acknowledged that the turbulent political scenario of South Asia has left a mark on the state of art and its politics.

"In dealing with the political upheaval, which directly connects to issues of everyday survival on one hand, and the lack of arts infrastructure within each of these states in the other, artists across these countries try hard to make sense of these changes,” Komu said.

The Young Subcontinent Project tries to "strut the existing system, in which state institutions of art lay in ignorance with meager programs to support intellectual or artistic activities, by foregrounding young artists who have been able to energetically channel such currents into their own works."

Komu, who has successfully explored the shared histories and colonial encounter of India, Pakistan, Bangladesh, Sri Lanka, Nepal, Bhutan, Afghanistan and Maldives, upholds the idea that ‘shared’ should not be just about pointing out the common, existent grounds for dialogue, but about productively creating them. "Art making should help in preparing platforms (common grounds) where different cultures can come together to share and interpolate ideas about humanity and life."

“The Young Subcontinent Project aims at strengthening infrastructure of the arts by means of patronage and building valuable artistic networks within the country and extends this agenda by involving a network of neighboring countries. It attempts to look at how artists in various countries are trying to engage and translate the socio-political concerns within their own artworks – the forms of which are unique and multifarious,” he said.

After his extensive travel through the Asian subcontinent as the curator of the project and meeting artists and others from these regions, Komu has come to the conclusion that it is the distorted perceptions fabricated by some media houses that is holding back people from reaching the common grounds for dialogue.

"The warped sense of history has landed people into a strange sense of cultural insecurity resulting into questions of difference, otherness, alienation and belonging," he said.

However, Komu seemed pleased with the fact that his trips and interactions have reinforced a deep sense of brotherhood and cultural understanding. “One is pleasantly and softly triggered by many aspects of these cultures that have quietly found place in our everyday lives. Yet, today, we are at difficult equations with our neighbors. It is vital to reinstate the importance of our shared history to be able to appreciate the productive energy of a civilization, and further maintain a continuum that takes us to discover exciting possibilities of the future.”

This is where, he thinks, projects like the Serendipity Art Festival (SAF) gain importance. “They help in the surveying of art practices at many levels – historical, disciplinary, geographically, culturally and so on. Such surveys have immense potential to become archives that can then be operated upon through curatorial endeavors.” Komu feels that this archive would help mobilize politics.

"SAF would provide an opportunity for discourse and dialogue around culture bringing together artists and public. It would bring different disciplines together to test and constantly evolve their own political positions through immersion in each others’ works. SAF thus has great scope for influencing mass imagination around art and culture,” Komu added.

The Serendipity Arts Festival will be held in Panaji, Goa, from December 15 to 22 and it will hold an exhibition of Young Subcontinent Project, curated by Komu.