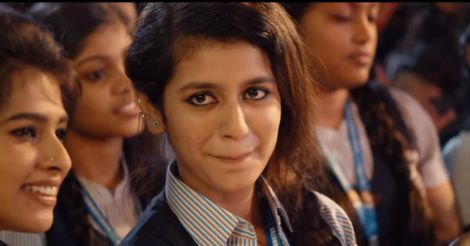 'Oru Adaar Love' tells the story of plus two students starring a bunch of newcomers.

Kochi: The first song from Omar Lulu directorial, 'Oru Adaar Love' has become viral on YouTube within few hours of its release.

Social media was flooded with comments and messages appreciating the music and the performance of debut actors featured in the video.

The track is trending on YouTube at number 1 position garnering more than 1 Million views and 50,000 likes in just 20 hours.

'Manikya Malaraya Poovi' is famous song, which falls in the genre of Muslim folk song in Kerala known as Mappila Paattu. The song was originally composed by Thalassery K Refeeque to lyrics penned by PMA Jabbar.

Shaan Rahman has beautifully remixed the song lending it a fresh tempo and melody. Vineeth Sreenivasan has rendered the song with an uncanny charm.

Written and directed by Omar Lulu, 'Oru Adaar Love' tells the story of plus two students starring a bunch of newcomers. The visuals and the song complemented each other so brilliantly that the whole 3.16 minutes pass in a jiffy.

The screenplay and dialogues are scripted by Sarang Jayaprakash and Lijo Panadan. Sinu Sidharth has handled the cinematography where as Achu Vijayan has done the editing.

Music is composed by Shaan Rahman. The movie is produced by Ousepachan Vaalakuzhy under the banner of Ousepachan Movie House. Muzik247 is the official music partner.