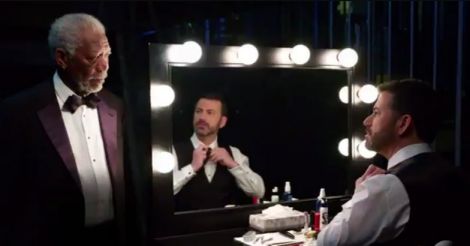 Los Angeles: Jimmy Kimmel, who will be hosting Oscars this years, got a pep talk from veteran actor Morgan Freeman ahead of his stint at the 89th Academy Awards ceremony.

In a clip released on the official Oscars YouTube channel, Freeman has lent his voice to help the "Jimmy Kimmel Live" host.

"James 'Jimmy' Kimmel. A man on the precipice of hosting the Oscars and an opportunity to be the toast of the town," Freeman can be heard saying.

Freeman continues saying the hosting gig will either be "an opportunity to be the toast of the town" or a "chance to bomb so fantastically, everywhere he goes people would say, 'look at sucky sucko --he had his shot, and man, did he blow it in front of billions'".

Kimmel's eyebrows furrow, and he tells Freeman, who is standing right next to him, that his words aren't encouraging.

"Well, fine. Do your own damn pep talk," Freeman says at the end of the video.

Oscars will air in India on February 27, while "Jimmy Kimmel Live!" airs on Star World and Star World HD in the country.