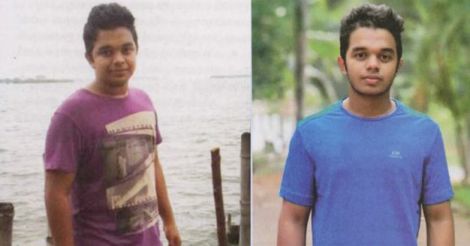 Hyder Sherif from Kadavanthara, Ernakulam, first thought of shedding a few kilos when he was a student of civil engineering at FISAT, Angamaly. The campus had several lean, but handsome boys though not many had six-pack. Among them, Hyder was a fatty at 85 kg.

Hyder went into a gym during the first semester itself. The initial idea was to trim down, but Hyder had a longing for a six-pack now. He recalled that the 85-to-65 kg trimming wasn't that easy, though he was not desperate in his bid to cut weight. "There were not many restrictions in food or exercise. The decision was to slim slowly. I was rather slim during high-school days, hardly hitting 50 kg. Those days the longing was to put on weight. I had in fact struggled a bit munching much. I used to have a good fill every time as I didn't have enough weight. Rice, fried fish and fish curry were my favourites and my mother makes tasty food," he said, while pointing to the likely factors that made him obese.

As Hyder felt he developed flab by consuming too much rice, not due to excess of fast food or junk, he decided to change his food habits. "I started skipping rice as a first step towards reducing weight. Rice was totally eliminated and pastries, cakes, sweets and the like were avoided. I totally ignored fried food and junk, which in any case I was never fond of. Sugar was also cut. And I increased the quota of food containing protein.

With a new diet plan, Hyder commenced a new phase. "Breakfast used to be appam, chapati or idli, never more than two pieces. Curry was omitted and salads were added. I used to take fruits like pineapple for lunch at college. It was a novelty for my friends initially. But once they saw the results they started encouraging me," he recalled.

Hyder stuck to his regimen and soon he noticed positive signs. "I used to return from the gym by 08.45 pm. I would then take four-five egg white and milk. And then some fruits. It was hard for the first three-four months. One or two months after I started going to the gym, my weight suddenly started coming down. That inspired me to stick with the diet plan at any rate. But once in a week it used to be a free day, when I would eat whatever I like," Hyder said, while admitting, "it used to be a bit hard when there are special events at home. I can't omit the food specials. I would then limit my intake, and do more exercise at the gym. Normally the workout is for one to two hours. It is two hours on holidays. Gym visits are six days a week. On each day a set of drills are done for a group of muscles. Besides I do treadmill, elliptical or floor cardio exercises. The plan is 30 minutes for cardio drills and an hour of weight-lifting for muscles."

Fortunately, Hyder had a supportive family that adjusted to his diet regime. "My parents gave me all-out support. All they wanted was to see me trimming down. I could continue my diet and exercise without break, thanks to their support and encouragement. I reduced a 20 kg within a year. Now I'm in the bid for some muscle power that I desire," Hyder divulged his next task.