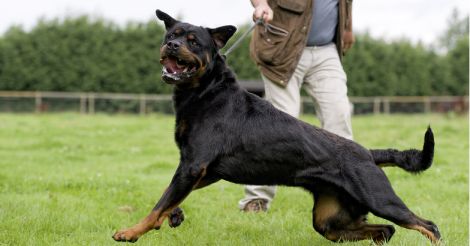 Aggressive and unpredictable dogs can be the nightmare of even the most devoted dog person. The blame often falls on dog breeds labelled as dangerous and aggressive, and of course, their owners for choosing to raise them in the first place. Recent reports of deaths and near fatal injuries caused by dog attacks have pushed Rotweilers right back into the jaws of a gnawing controversy. But then there are dog owners who swear by their gentle-as-a-lamb Rottweilers. So how do we sift facts and myths in this furore over ‘dangerous dog breeds’?

The truth is any dog can cause damage and danger if not properly trained. Aggressive traits are in the nature of some breeds more than others, but it would be wrong to say that all dogs of certain breeds will behave in the same way. In the case of breeds like Rottweilers and Pit Bulls, whose sheer size and temperament are intimidating, what makes the difference is training and socialisation from infancy. Tough breeds can be brought up to be obedient and sociable only under the training of a calm and assertive owner.

Training makes all the difference

Dogs mostly exhibit the behaviour they have learned through the course of their life. The difference is not so much about breeds as it is about the training, lifestyle, food, communication and assertive leadership provided by the owner. When the basic needs of the dog aren’t met by the owner, you are sure to encounter a canine villain.

Chihuahua, the smallest breed of dog, can develop aggressive tendencies towards strangers and children if not properly trained and socialised. But the aggression of a Great Dane is more in the public eye. The crucial difference here is the fact that size plays a major role in making dogs dangerous.

Pit Bull, Great Dane, Doberman, Rottweiler, German Shepherd and Saint Bernard are among the breeds commonly perceived as inherently aggressive. The more important point is these are massive, extremely strong dogs which make them potentially dangerous. Appropriate training is necessary to make them obedient and suitable as family pets.

Training does not mean teaching your dog to behave like police dogs. Harsh treatment and punishments can only serve as a shortcut to owning an aggressive and bad tempered dog. The inherent nature of dogs is to establish dominance. Improper training, harsh ownership and lack of physical exercise will result in frustration.

General obedience training is where you get started. It is crucial to teach your dog what you expect of it. Teach them to obey basic commands. ‘Sit’ is one of the easiest obedience commands to teach and a good one to introduce to your puppy while getting it accustomed to commands. ‘Come’ is an important command that your dog should pick up early on because it will keep the dog out of harm by bringing it back to you in any situation. One command that you might have a hard time getting your pup or dog to pick up is ‘Down’. This position shows submissiveness, which is a difficult emotion to elicit from any dog, especially the large breeds with aggressive traits. ‘Stay’ and ‘Leave it’ will complete the 5 basic obedience commands for your dog. It takes time for your dog to figure these out, so keep calm and gives her lots of treats and affection for each right step that she takes.

Remember, you are the leader of the pack!

What defines your relationship with your dog is your ability to assume the role of the human alpha leader. Dogs are social animals with an instinctive sense of pack mentality. If you observe little puppies, you will notice them developing either dominant or submissive personalities as they grow up. The behaviour of your dog as it grows older lies soundly with your ability to establish the leadership role.

Whether you own one dog or more, it is important to lay down the structure of the pack in order to maintain your role as leader. Without a leader and the parameters set for the pack, the dog is confused and frustrated. Your dog is constantly looking up to you for guidance as to what behaviour you deem appropriate. When you have communicated clearly with your dog about what you expect from her, you have established a stable relationship with your four-legged friend.

You become the alpha leader by making it clear from your dog’s infancy that you are the one who makes all the decisions. Stay calm, stable and assertive while interacting with your dog. Always remember that you cannot train a dog by inducing fear. Kicking, spanking and yelling will only give you an aggressive and frustrated dog. They do not understand it and will only serve to confuse the dog. If you are not clear about how to communicate and behave as a leader, it is best to get the help of professional dog trainers, especially if you own large breeds.

A 2014 study led by academics at the University of Bristol’s School of Veterinary Sciences indicates that the common tendency to categorise dogs as either generally ‘safe’ or ‘vicious’ is a misconception, and that most dogs show aggression as a learnt response to particular situations.

Dr Rachel Casey, a professor of Companion Animal Behaviour and Welfare at the university, says – “Dog owners and members of the public need to be aware that any dog could potentially show aggression if it is anxious or feels threatened, even when it has never done so before. On the other hand, dogs which have shown aggressive signs in one situation are not necessarily ‘dangerous’ when in other contexts.”

A similar study conducted by University of Pennsylvania attempted to assert breed differences in dog aggression. At the top of the list which rated 33 dog breeds for aggression, was dachshund, the weiner dog, better known in some countries as the sausage dog. The list threw more surprises with Chihuahua, the smallest breed in the world, coming in second on the list.

To sum up, dog breed is not always a reliable indicator of aggression. Perhaps, Rachel Casey’s straightforward blog title says it all - "Dog aggression has little to do with breed, so test the owners"