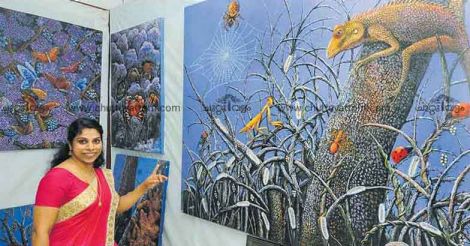 The Kozhikode-based artist was recently awarded the prestigious Lalitha Kala Akademi Award for one of her paintings.

G.S. Smitha’s paintings are full of creepy-crawlies and that's what she loves. You name them, there they are, crawling or flying all over her canvas. Snails, beetles, lizards, butterflies, moths, owls, spiders, grasshoppers, ladybirds, praying mantis and maggots come to life through her paintings.

You ask her to paint something in particular, she clams up. This was exactly why she disliked taking part in school competitions. In schools, students are usually given a theme and asked to be creative, something Smitha could never come to terms with.

What’s it that inspires the artist? Colors? Color is obviously not a muse for Smitha. But a creature or an insect is! And more often than not, it’s her fondest creatures that bring out the best in her. It’s these living beings who decide what she should paint. And the moment they just flit or crawl past her, she takes up her brush. It’s as if the creatures urge her to give life to them on a canvas. Many a time, she’s painted a beetle or a praying mantis, firm and blissful in the thought that, that’s exactly what the little beings wanted. She’s even felt that while painting a mantis, it was right there on her hands, egging her on to paint its portrait.

When almost all people say “ugh” or “yuck” to a snail, a bug or a mantis, they are Smitha’s lifeline and inspiration. Once, a group of kids was viewing a canvas full of caterpillars. Not too pleased with the painting, they started scratching themselves in a feigned act of annoyance. Yet, there are others for whom the 'lesser mortals' have a beauty and a presence.

Smitha is one such human being for whom the meanest creature on Earth is worthy of her love and reverence. Right from childhood, she used to keenly observe insects, maggots and all sorts of crawling creatures. She has spent hours watching the antics of antlions (kuzhiyana). That’s how she learned that antlion is the larva of the dragonfly. Smitha has painted the lifecycle of the antlion transforming into the dragonfly. She frets over the thought that insecticides may ultimately weed out her dearest creatures from the face of the earth. If that were to happen, tomorrow’s kids would never know that such creatures once lived on this planet.

That’s why she decided to immortalize them all on canvas, in their true colors. One of her paintings shows huge mounds of garbage with a clump of withered trees close by. A grasshopper flits around trying to locate a green patch. An owl resting on one of the branches of the dead trees looks down on the garbage dumps.