Panaji: As the film "Pad Man", starring well-known actor Akshay Kumar, released in theaters two days back, there was a palpable excitement in a small nondescript village near here.

A group of women, who have been following in the footsteps of Tamil Nadu-based real life 'pad man' Arunchalam Muruganatham, were thrilled to watch the story of their mentor being enacted on screen.

Three years ago, the group of women from Mulgao village in Bicholim taluka, about 45 kms from here, started a small-time venture of producing bio-degradable sanitary pads out of pine wood paper, after being inspired by Muruganatham.

"The entire group went to watch the film on the second day of its release in a theater at Bicholim. Muruganathan has been an inspiration for us and it was a treat to see his story on screen," says Jayashree Parwar, who heads the self-help group that produces the sanitary pads - named 'Sakhi'.

The brand, registered in the name of Teerathan Enterprises and having its headquarters in Bicholim, now has buyers across the globe.

"We knew the film was being produced. Muruganatham himself called us to inform about it. We were all waiting for its release," Parwar said excitedly.

A common friend had introduced Muruganatham to Parwar some years back, and then there was no looking back for her.

She put together a group of 10 women from the village who, after an initial reluctance, agreed to join hands.

However, she recalled how their initial phase was marked by struggle and challenges when they had to learn how to make the bio-degradable sanitary pads and sell them. 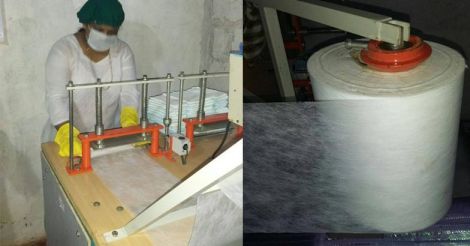 Though the pads were ready, there were no buyers as the group struggled to convince the users about the product.

The pads also failed to find a space in shelves in the markets among the other branded products, which were advertised on television and other media.

A few well-wishers of the group then decided to give this ambitious product an initial push and then came the online platforms, Parwar said.

"When we went to market with the product, we were told that no one will buy it as it is not advertised on TV. A few of our known people helped us in marketing, but on a small scale," she said.

The sanitary pads are now sold online and have even reached the international buyers, she further said.

"We did not get an overwhelming response from locals, it was moderate. But the online demand is huge," Parwar says.

"The basic problem with the regular sanitary pads is that they are not easily degradable in soil after use. But the pads that we manufacture are made of pine wood paper. So, after use, the pads are buried in mud and they get degraded within eight days," she claimed.

Besides the pine wood paper, they also use silicon paper, butter paper, non-woven cloth and cotton for making these eco-friendly pads, Parwar said.

The firm currently has four machines which can produce 100 pads a day.

The pipe wood paper is procured from Tamil Nadu, she said, adding that the pads are disinfected with the ultra- violet radiation before being packed.

Parwar feels the release of the film "Pad Man" will not only encourage her 'comrades' but will also fuel the demand of their product in local markets.

Read: Women in Business | At 22 years, she helms a technology company