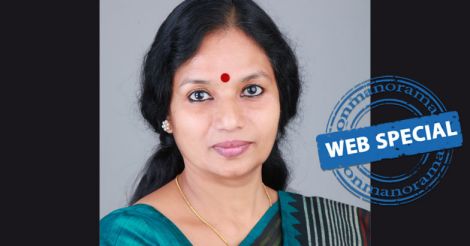 Who wrote the Marquez you quote with pride? Answer: Edith Grossman. And what about the Milan Kundera you are in love with? Michael Henry Heim. Or the imaginatively erudite Orhan Pamuk? Well, that was Maureen Freely.

Translators are the unsung heroes; they do their job and disappear. A reader will never know the linguist who mediated between him and the charismatic foreign language writer. Nor the intellectually taxing effort a translator has put in. A translator reads the author’s work with maniacal attention to nuance, detail and cultural implication; then he sets out to reproduce it in his own language to new audiences and comes up with something that is astonishingly faithful to the original.

Nonetheless, these lieutenants of cultural cross-fertilization of literature are rarely acknowledged. And in the unlikely event that it happens, we make sure not to shine spotlight on them. Perhaps that’s the reason why we didn’t read much about Sreedevi K. Nair, who became the first translator from Kerala to receive the prestigious Charles Wallace India Trust Fellowship for translation.

A Lalita Kala Academy winner and a faculty head at NSS College for Women, Thiruvanathapuram, Dr. Nair muses on the art of translation.

This is the first time a Keralite is receiving the Fellowship for Translation from Charles Wallace India Trust. How excited are you and when are you starting your project?

I’m happy that it has finally come to Malayalam. It could have come much earlier, though.

The conceptual frame of the work is already done. The actual writing will be carried out when I will be at the British Centre for Literary translation in Norwich from April to July, 2017.

The Charles Wallace India Trust (CWIT) offers several grants and fellowships to help Indians achieve their artistic, academic and professional goals. It functions in collaboration with the British Council.

As far as I could understand, the CWIT Translation fellowship assesses three things- (a) the overall contribution one has made to the field of Translation Studies (b) the quality of his/her translation, and (c) the worthiness of the project proposed.

What made you venture in this field and what were the hurdles and struggles you had to face?

I did research in Translation Studies. So, trying my hand at translating was just a natural progression, from theory to practice.

Translation doesn’t generally pose problems or hurdles. Even in the distant ages, when women were denied the right to write, they were allowed to translate. If ever I struggled while translating, that was to find the right words.

The first work I translated was Anton Chekhov’s ‘Nincompoop’. I translated the title as ‘Mannunni’ in Malayalam. That was 25 years ago in 1992 when I was working on Translation Studies for my PhD. All that I remember about that translation now is that it was published in the Souvenir of Calicut University Teachers’ Association.

Before that, I translated Ananada Coomaraswamy’s Introduction to Indian Art into Malayalam under the title ‘Bharatheeya Kalaykkoraamukham’. It was awarded the Lalita Kala Akademy’s 'Best Translation of an Art Book' Award.

Which is that one book you found difficult to translate and how many works have you translated so far?

I have translated only eight books in English and Malayalam together, and that too over a period of 25 years. I have also written a few articles on translation, which have been published in national and international journals.

Malayalam to English or vice-versa? Which one brings out the best in you?

I was under the impression that I can use English and Malayalam equally well for all purposes till I tried my hand at translating. Now I realize that different texts demand different sort of language expertise, and that I have my limitations in the use of both the languages. For example, certain turns of phrase and ways of expression, which come naturally to those who ‘live’ the English language, I may have to strain to catch. Likewise, translating knowledge texts into Malayalam is an uphill task as Malayalam technical or scientific terms are unfamiliar to me. But when it comes to the true blue literary (the concept of ‘the literary’ is questionable, I admit. Even so, I’m sure everyone will understand what I mean), I can translate or write with ease and felicity, be it Malayalam or English.

Every language represents a culture. When you translate from one language to another, there will be a culture transition. How do you find a cultural equivalent and how difficult is it while translating a work? Do you try to find parallels in the translated language or try to keep the same elements from the original work?

Culture is all pervading. It is there in every bit of a book— in the way its characters think, talk, work or play; in the way they see, comprehend or experience reality… However, this does not mean that culture-specific words or descriptions are unimportant or that we can handle them in any way we please. In some texts, they may carry overarching significance. In certain others, it may not matter much even if we omit a particular expression or reference. It all depends on the kind of text one is translating, the audience for whom it is done and the purpose of the translation.

There are any number of ways to translate culture. One chooses a method, which is the most appropriate for the text in hand. Using parallels or retaining the unfamiliar and glossing, are certainly two of the ways.

Do you think that translators always get the recognition they deserve?

No. Malayalam translations give the feeling that they simply ‘happen’ (like Gods), in the language. Just take a look at the Book List of even a major publisher like the DC Books. They will list Eekaanthathayude Nooru Varshangal - Gabriel García Márquez; Ennappaada - Helon Hebila, and so on. The vanishing trick is done on the translator. The translator in general, does not find a mention in the front cover of the book though it is the ideal thing to do. Any work of translation is the work of the author as well as that of its translator. Things are much better in the case of translations into English.

How do you find time to translate along with your academic activities?

It’s simply because translation is not ‘work’ for me; it’s the way I relax.

Do you have plans to write your own book?

I keep telling myself stories — for pure fun; to make life more enjoyable; rarely to make life just palatable….Haven’t ever thought of writing them down.