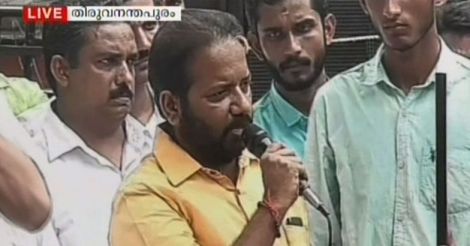 Thiruvananthapuram: Vitriol and reactionary vigour was the characteristics of a street speech made by BJP Thiruvananthapuram district president S. Suresh here on Tuesday. Warning the police and all 'others' of aggressive action, he said 'heads would roll' if anyone dared touch party leaders and workers.

Suresh's provocative speech was made at a 'corner' meet organised by the RSS in protest against an attack on one of its leaders at Anavoor. The protest was in front of the office of the deputy superintendent of police, Neyyattinkara.

Suresh said the police had to thank the BJP and the RSS for the maintenance of peace and order at Anavoor. “The day we decide to get even, there will be an 'advance' in search of the heads and hands that touched our leaders and workers. You will not be able to resist that advance, no matter how many policemen you line up,” Suresh said.

The Sangh Parivar outfits alleged that the police were inactive even 20 days after RSS district leader Vinod was targeted at Anavoor. The BJP and the CPM had been fighting one another at Anavoor, Parassala and Nemom ever since the bitterly fought assembly election last year.