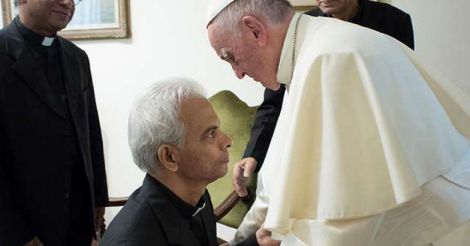 Fr Tom Uzhunnalil said that his kidnappers never threatened or misbehaved with him in any way: File photo.

Vatican City: Keralite Catholic priest Fr Tom Uzhunnalil, who is here after being released from the captivity of terrorists in Yemen, hopes to return to his homeland soon.

He said he would return to Kerala within 10 days. His journey is being delayed due to lack of passport.

"I expect to get a new passport shortly," he said. He was speaking to reporters at the headquarters of the Salesian church here on Saturday.

The priest said he was not suffering from any serious health issues. "I lost weight due to diabetes, not starving," he said.

Uzhunnalil's voice broke as he publicly expressed his condolences.

"I thank God almighty for this day. He saved me healthy enough. Clear mind. Emotions under control until now," the 59 -year-old Uzhunnalil said. "God has been extremely kind to me. No gun was pointed at me."

He said that when the home for senior citizens was attacked, he identified himself as an Indian and he was brought to another room "while they killed the others."

The priest said he didn't know his kidnappers' identities or affiliations and believed their motive was ransom, although the head of Uzhunnalil's Salesian order, Don A. F. Artime, said they had no knowledge of any ransom having been paid.

"No one ever told us that they asked for money. No one asked us for even a euro," Artime said. "We don't know anything about this. This is the whole truth. And I believe that Father Tom knows even less."

The mechanisms behind his release also were unclear, but the Vatican has thanked the Sultan of Oman in a statement and Uzhunnalil thanked leaders in his native India.

Shedding light on the one-and-a-half years spent in captivity, Fr Uzhunnalil said, “In captivity I had enough freedom, within limits of course. My captors asked me how old I was and when I replied, they told me 'Don't worry, you will live till 85.' I celebrated two birthdays in captivity,” the priest said, adding that his birthday was on August 18.

“I never felt threatened by the terrorists. They moved me to different holding cells blindfolded. Yet they did not harass me in any way, and cared for me when I fell ill”, Uzhunnalil said.

“I could get up and walk around as I pleased, and they even asked me to exercise to feel better. They never threatened me in any way,” he said.

During his captivity, Uzhunnalil said he prayed and exercised his mind by reciting Mass by memory.

When he was loaded into the trunk of a car when he was first kidnapped, Uzhunnalil said that the tabernacle from the altar inside the senior home was at his feet. His hands weren't tied, and he was able to reach under the velvet cloth and touch it, confirming that it contained four or five Eucharistic hosts that he had blessed the day before.

"So I said to myself, without the knowledge of God, nothing will happen to me," he said.

Father Uzhunnalil was kidnapped on March 4, 2016 by a group of militants in Yemen, when they attacked a retirement home in Aden run by the Missionaries of Charity. He was released last week and flown to the Vatican where he met with Pope Francis.

(With inputs from AP)

Read more at: Latest in Kerala | Bromancing Chandy and Mani drift to the same boat