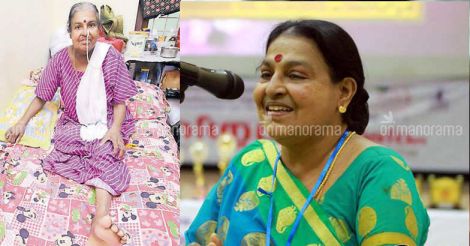 Thodupuzha Vasanthi had begun her film career through a dance sequence in Dharmakshetra Kurukshetra in 1975. . Photo: Manorama

Thodupuzha: Veteran Malayalam actress P Vasanthakumari, better known by her stage name Thodupuzha Vasanthi, has died of cancer. She was 65.

Thodupuzha Vasanthi had acted in over 450 movies and also appeared in 16 tele-serials and 100 plays.

The Thodupuzha native had begun her film career through a dance sequence in Dharmakshetra Kurukshetra in 1975. She first got a character role in Ente Neelakasham in 1979. She was noted for her performance in 1982-film Alolam. Her last film was Ithu Thaanda Police that released in 2016.

She had received a Kerala state award for her performance in the theater. She had also received a Film Critics Award.

Ever wondered where this actress was?

Thodupuzha Vasanthi gets support from WCC

Onmanorama had earlier featured the plight of the elderly actress who was facing a tough time, battling the tragedies in life.

She could not continue as an actress due to various ailments. She started a dance school when she could not find enough work with cinema. Even that was closed two years ago. She was left with a leaking house and torments of a lifetime.

The project started rolling at Kuttikanam on Wednesday following the COVID-19 protocol.