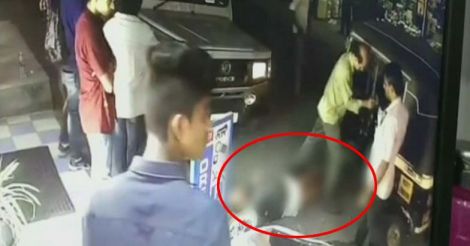 Saji lies on the road unattended before being taken to hospital. TV grab

Kochi: A man who fell from the third floor of a building at the heart of the city was saved by a woman who took him to a hospital. Ranjini, an advocate practicing in the Kerala High Court, came to the rescue of the man when all the others who gathered around him just stood there watching him writhing in pain.

Saji, from Divine Nagar near Thrissur, fainted and fell from the corridor of a lodge near Padma Junction on Saturday evening. He landed on top of a scooter parked along the busy road. The shocked passers-by just looked on until Ranjini took the initiative to take him to the hospital.

Saji received medical attention at the General Hospital in the city before he was sent to the Government Medical College Hospital in Kottayam.

Saji told Manorama News that he fell accidentally. He said he was in Kochi in search of a job. His brother was informed about the accident.

Chief minister Pinarayi Vijayan on Monday expressed shock at the apathy shown by the onlookers.

Pinarayi said in Thiruvanathapuram that the woman's intervention to rush the man to hospital should be emulated by all.

Many people fear that they would have to face cases if they help accident victims reach hospital, but those who come forward to render such assistance have the protection of law, he said.

The government was in the process of implementing a policy that ensures 48-hour free medical treatment to accident victims, he said.

"The man was severely injured. He was bleeding but still breathing. So I did not think twice. I along with my daughter pleaded for help from people to take him to hospital at the earliest," Ranjini said.

The man, a native of Thriprayar in Thrissur district, was rushed to the general hospital at Ernakulam. He was later shifted to the government medical college hospital at Kottayam, for better medical care, hospital sources said.

In a video posted on his facebook, the actor also condemned the attitude of some persons who gathered at the spot without offering any assistance.