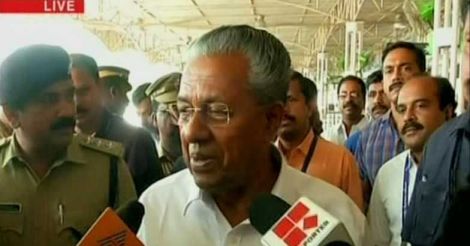 The chief minister’s office had issued a statement which said Pinarayi and wife Kamala undergo check-ups at Apollo Hospital in Chennai every three months.

Thiruvananthapuram: Dismissing rumours about his health, chief minister Pinarayi Vijayan has said that he is totally fit. “There are people who want to see me dead. They are the ones who spread the canards speculating about my health,” Pinarayi told the media at Thiruvananthapuram airport.

The chief minister was returning to the city after a check-up at Apollo Hospital in Chennai.

When reporters sought Pinarayi’s reaction on the Tripura election results, he replied that he had something else to say. “The check-up at Chennai is a routine that I have been following for the past 15 years. I have absolutely no health issues. There are several people, including media-persons, who say referring to me, ‘So many lives are lost in road accidents, but this fellow is still alive’. The rumours about my health were spread by such people,” said the chief minister.

Pinarayi went on to relate an old incident. “Once, when I reached the AKG Centre, a man was waiting there. Seeing me, he was telling a friend of his, ‘Why doesn’t some vehicle run over this fellow?’ Reports that my platelet count had fallen were created by such people,” he said.

“If somebody wishes for another’s death, it will not become true,” added Pinarayi.

The chief minister’s office had issued a statement which said Pinarayi and wife Kamala undergo check-ups at Apollo Hospital in Chennai every three months. “There is nothing unusual in the latest check-up,” it said.

Meanwhile, the medical bulletin from Apollo also said that the chief minister had visited the hospital for a regular check-up.

Pinarayi had shifted to the Government guest house at Chepauk in Chennai from the hospital on Saturday evening, where actor Kamal Haasan called on him.