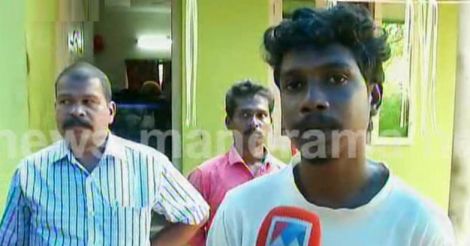 Sajith told Manorama that he too was thrashed by the police though both he and his brother were away that day: Screen grab

Sajith's statement against policemen comes as the special investigation team is set to take over the investigation of the custodial death.

Sajith said that Sreejith, who was nabbed on suspicion of involvement in an attack on a house leading to a man's suicide, was beaten up at his house, inside the police vehicle and at the police station.

Sajith also said that he himself was beaten up by the cops.

“When Vasudevan's house was attacked, both Sreejith and I were away and we were not part of the group that carried out the attack," he said.

Details of the post-mortem examination in the custodial death case will be available to the police on Wednesday.

The special investigation team set up on the orders of the DGP and headed by IG S Sreejith will begin its probe on Wednesday.

The team members will visit Alappuzha medical college and obtain details from the forensic surgeon who led the team that carried out the autopsy. The SIT has been asked to go ahead with the probe and not to wait for the autopsy report.

Why was Sreejith arrested?

Sreejith died on Monday after he was taken into custody over the suicide of one Vasudevan.

Vasudevan's house was attacked by a group of miscreants following which he committed suicide.

Vasudevan's son Vineesh, had said Tuesday that Sreejith or his brother Sajith were not involved in the attack on his house.

He also said that the deceased was known to him and had not mentioned him in the FIR filed with the police either.

Prima facie it looked the police had arrested Sreejith mistaking him for a namesake.

Sreejith succumbed to internal injuries in a private hospital in Kochi.

Mohanlal reportedly flew to Dubai over the weekend after completing the shoot of his forthcoming film 'Drishyam 2'.