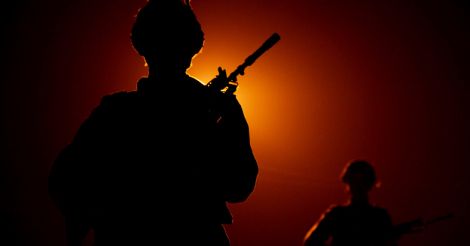 Jammu: In third such attack this year, a team of Pakistani special forces on Thursday sneaked 600 meters across the Line of Control (LoC) into the Poonch sector of Jammu and Kashmir, killing two Indian soldiers while losing one of their men in retaliatory action.

One of the attackers was killed in the Indian retaliatory action and his body was extricated under the cover of heavy firing by the Pakistani troops from their posts across the LoC, an Army official said.

The Border Action Team (BAT), which generally comprises special forces of the Pakistan Army and some terrorists, carried out the attack at around 2 pm under the heavy cover fire by the Pakistani troops from their posts, he said.

This was the third BAT attack on Indian patrol party along LoC in Poonch this year.

"A Border Action Team of 5 to 7 heavily-armed men, under the cover of Pakistani firing, entered 600 meters inside the LoC in Gulpur forward area in Poonch sector around 2 PM and launched a fierce attack on Army patrol party with several types of weapons," the official said.

The Pakistani attackers came up to 200 meters near the Indian posts.

During the attack, the Pakistani troops resorted to firing in Gulpur-Karmara-Chakan-Da-Bagh area along the LoC.

The armed intruders targeted an 'area domination patrol' of the Indian Army, triggering a gunfight, the official said.

The Indian troops killed one of the attackers and injured another whose extrication was facilitated by the cover fire by the Pakistani troops from their posts.

In the firefight, two Indian soldiers were killed.

Naik Jadhav is survived by wife Ujala and Sepoy Mane by mother Shoba.

In a similar BAT attack on May one, two Indian soldiers were beheaded in Krishna Ghati sector in Poonch district.

That attack too was carried out under the cover of shelling by the Pakistani troops.

Prior to that, a BAT attack was carried out on February 18 but there were no casualties in that.

Earlier, there have been several BAT attacks in which Indian jawans have been beheaded or their bodies mutilated.

On October 28,last year, militants attacked a post and killed an Indian Army soldier and mutilated his body close to the Line of Control (LoC) in the Machil sector.

In January 2013, Lance Naik Hemraj was killed and his body mutilated by a BAT. It had also beheaded Lance Naik Sudhakar Singh. Constable Rajinder Singh of the BSF battalion had suffered injuries in the attack.

Though ‘Shringar’ is a Hindi word, the short movie is in Malayalam and will be screened with English and Arabic sub-titles.